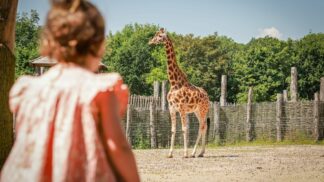 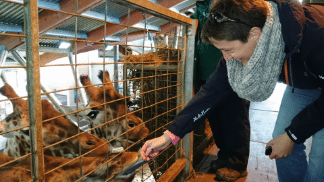 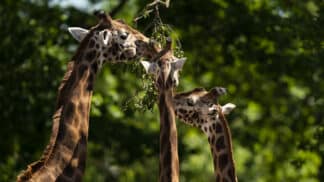 The giraffe (Giraffa camelopardalis) is the tallest living animal and with its uniquely long legs and neck is one of the most recognisable species in the world. They also have distinctive patchwork coat patterns that differ in appearance between animals found in various parts of Africa. Each individual giraffe can be identified from its own unique coat pattern in the same way that human fingerprints differ from each other.

Male and female giraffes have horns known as ossicones which are conical bone structures permanently covered in skin. The ossicones lie flat and are not attached to the skull at birth to avoid injury and only later become fused. They have 45-50cm long prehensile tongues which are black, blue or purple. No one really knows why they are these unusually dark colours, but it may help to protect the tongue from prolonged exposure to the sun.

The tallest mammals in the world, the giraffe’s height comes with challenges that have been overcome with special adaptations. Weighing around 11kg and about 60cm long, the heart of a full-grown giraffe is the largest of any land animal. It is needed to pump blood around its big body with a blood pressure twice that of an average human. A large, dense complex of blood vessels in the upper neck protect giraffe brains from sudden changes in blood pressure when they lower their heads to drink and raise them again. Just like us, giraffe only have 7 vertebrae in the neck but theirs are elongated and have ball and socket joints allowing greater flexibility. Large muscles and a strong nuchal ligament (at the nape) are needed to hold up the neck and head, giving giraffes a hump at the base of the neck.

The International Union for Conservation of Nature (IUCN) currently recognises a single species of giraffe but with 9 sub-species. However, recent studies suggest some of these may be more distantly related than previously thought and may comprise distinct species. The only other living relative in the giraffe family is the smaller, forest dwelling okapi Okapia johnstoni but the fossil record suggests there were once many other forms of now extinct closely related species. 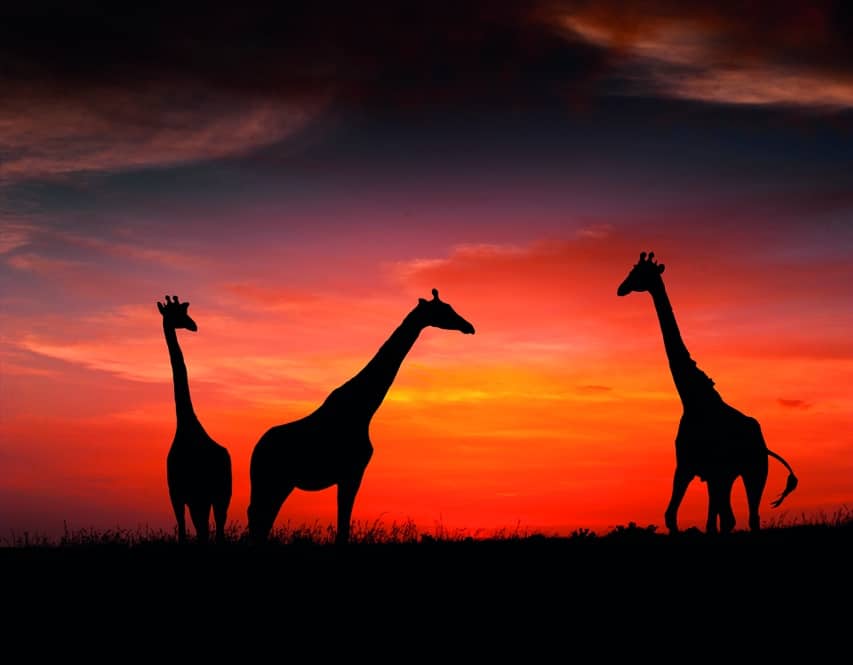 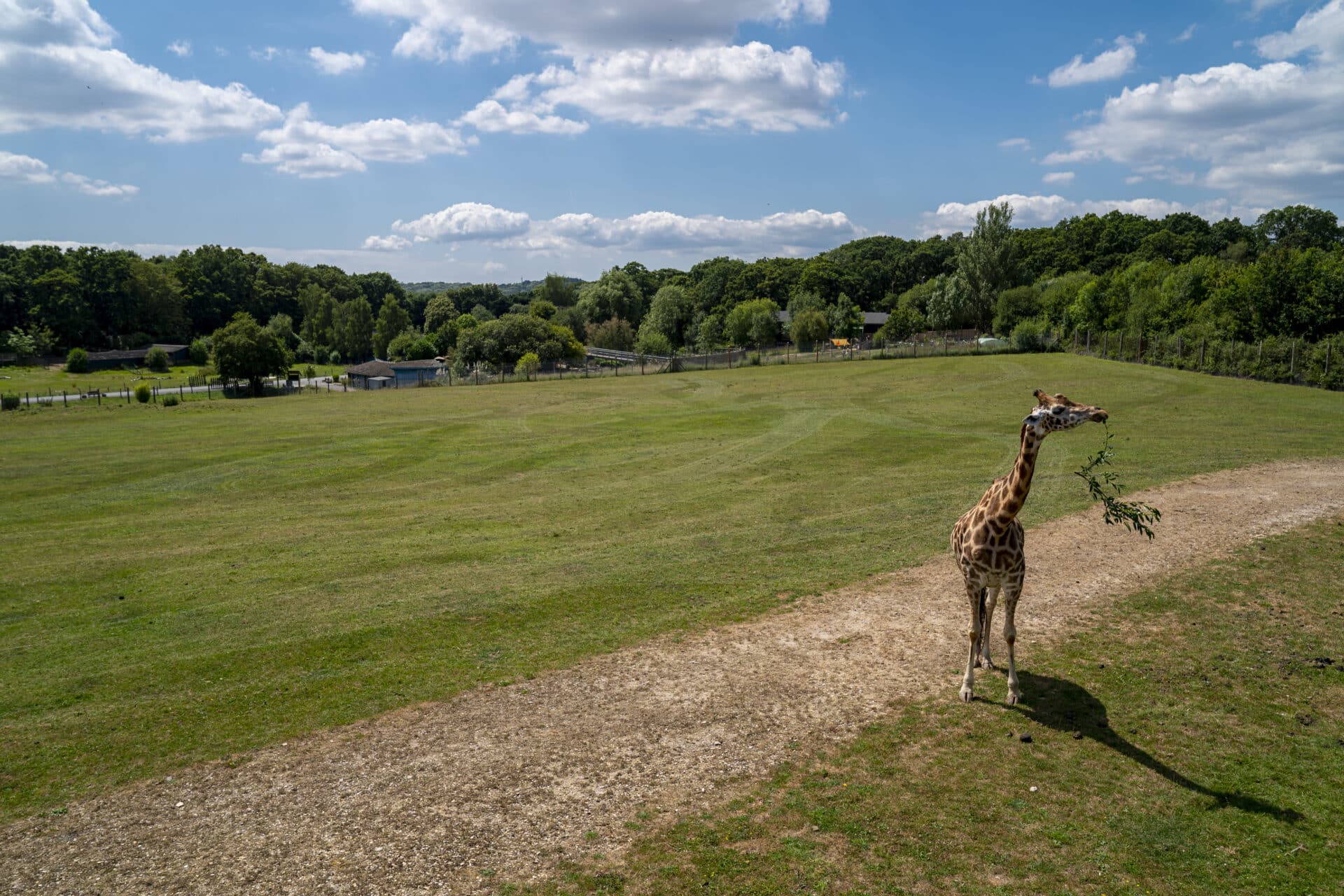 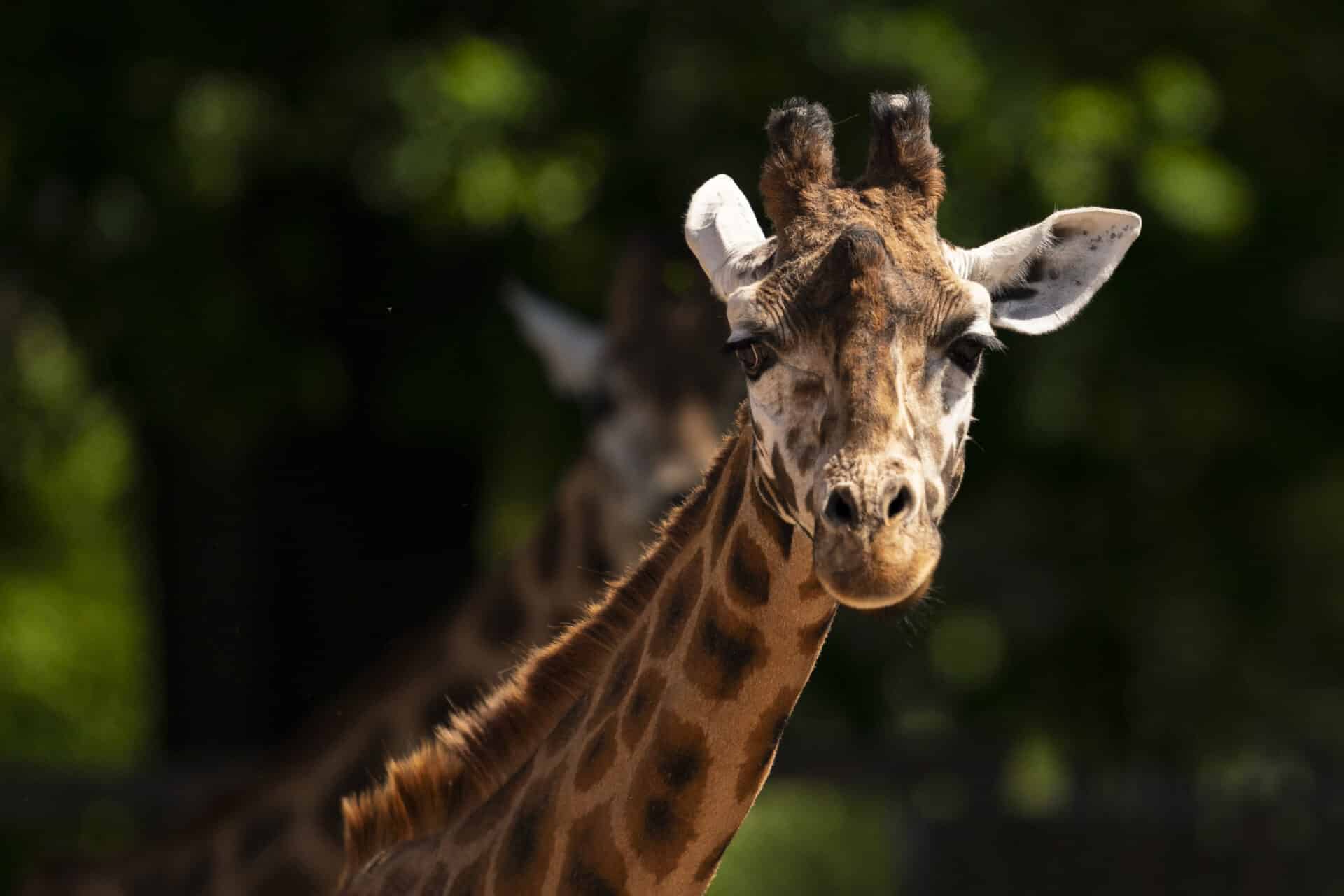 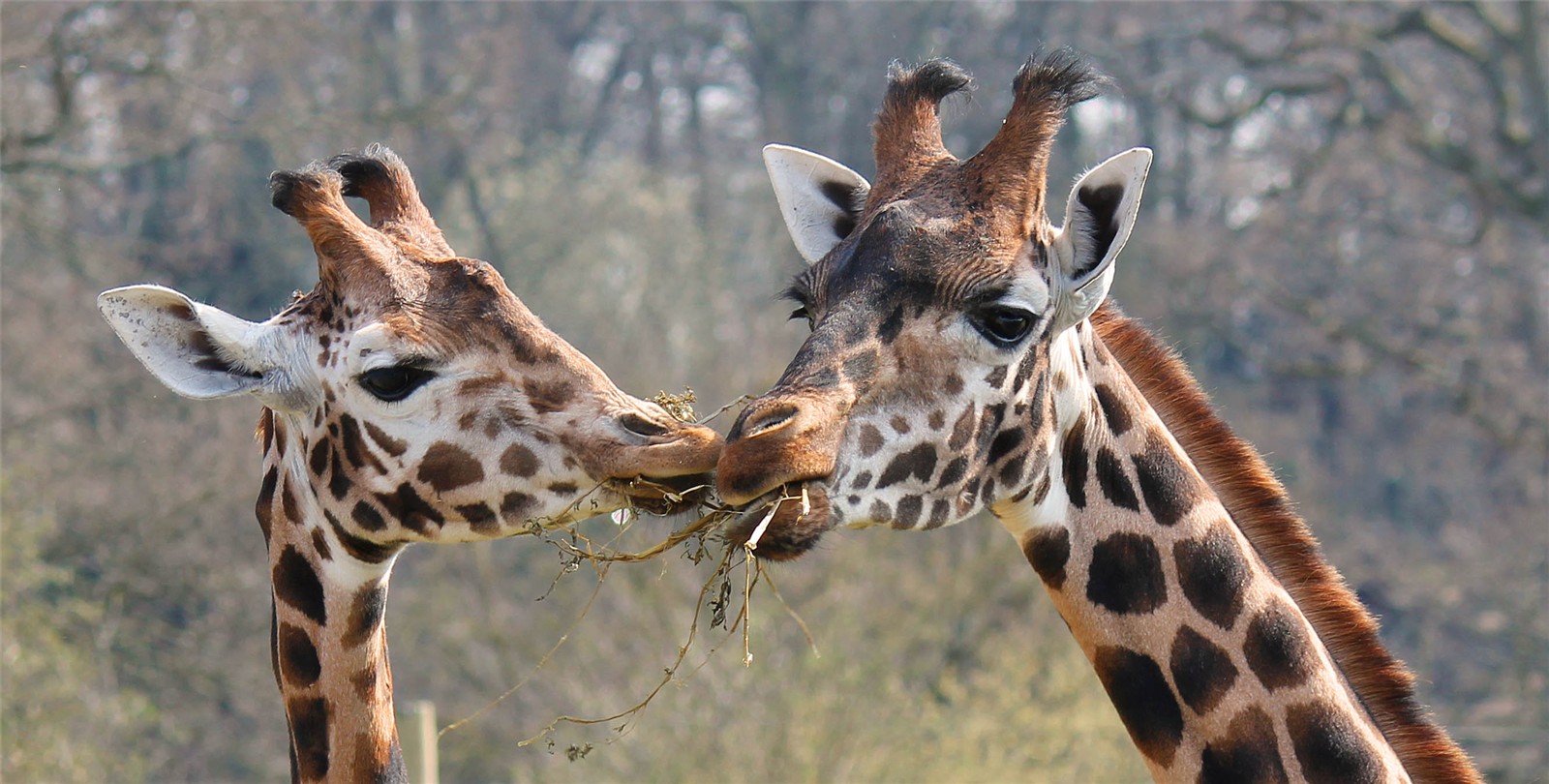 A giraffe eats a wide variety of plant-based foods. Giraffe are browsers, mainly eating leaves and twigs of trees and shrubs, but will also consume herbs, climbers as well as flowers, fruit and seed pods when available. Their height provides them with a competitive advantage over other browsing herbivores, allowing them to reach parts of trees that others cannot. They use their long tongues, dexterous lips and the ridged roof of their mouths to pluck their food, often negotiating spiky thorns. Thick saliva is thought to protect the tongue and mouth from these thorns and combat the chemical defences of plants.

Giraffes are the world’s largest ruminants, having a digestive system similar to that of cattle, sheep, antelopes and deer. Like their relations, a giraffe’s food passes through four compartments in its stomach where microbes play a vital role helping to digest their fibre rich diet. Giraffes have particularly strong oesophageal (food pipe) muscles that allow a bolus of semi-digested food to be regurgitated and chewed a second time (chewing the cud).

Giraffe only drink once every few days even when water is readily available. Ironically, their necks are too short to reach the water surface, so giraffes have to splay their forelegs and bend their knees to drink.

Giraffes inhabit savannahs, woodlands and even semi-deserts and desert ecosystems across many parts of Africa. Their home ranges tend to fluctuate according to season, and they often overlap with neighbouring herds. In the wet season when food is abundant, they tend to occupy smaller areas than at drier times of the year when they move further afield looking for food.

Giraffes play a unique and vital role in their ecosystems. They are able to browse high into trees and shrubs, opening the canopy and allowing light to filter through and promote growth at lower levels which benefits other herbivores. Giraffes have an appetite for seed pods of acacia trees, but the hard seeds themselves pass through the digestive tract and are dispersed and fertilised in the animal’s dung.

Giraffe have complex social systems. Stable groups may regularly come together with others to form larger herds which merge and split up depending on circumstances. Generally, males and females form separate groups, although immature males may join with adult females. Mothers and their female young form the most stable groups.

Fully grown males become increasingly solitary as they get older but wander between female groups seeking opportunities to mate and establish their dominance over other males though ‘necking’. Combatants may simply lean or rub against each other or enter into a more aggressive duel swinging their necks at each other and trying to land blows with their ossicones (horns).

Female giraffes give birth standing up which means that a newborn calf begins life falling nearly 2m to the ground but nevertheless can get up, suckle and run within an hour. Newborn calves are about 1.8m in height, growing very quickly and doubling their size in the first year. They are born in secluded locations and during their early life spend time hidden alone or in the company of other young giraffes while their mothers are feeding. Young giraffes then spend increasing amounts of time with the herd and by the time they are 6-9 months old, the activities of calves are similar to that of their mothers. Having gradually increased their intake of solid food, giraffes are weaned from 9-12 months. Male calves join all-male groups from about 15 months old while female calves usually remain in the same herd as their mothers or at least remain in the same area. Females are ready to breed around 4 or 5 years old, while males may not reach full size and therefore be able to compete for mates until 8 years old.

Calves are vulnerable to predators such as lions, leopard, wild dog, hyena and crocodiles. Most losses occur within the first month, but young giraffe remain particularly vulnerable during their first five years of life. Loss of adult giraffe to predators is low and while they may be preyed upon by lions, they are safer by virtue of their size, swiftness, and ability to defend themselves with powerful kicks.

Giraffes are now found in fragmented populations in southern and eastern Africa with smaller numbers in west and central Africa. They inhabit eighteen African countries and have been reintroduced to Malawi, Rwanda and Eswatini. However, they have now disappeared from seven countries where they once existed. There are thought to be over 100,000 giraffes in Africa, representing a decline of around a third compared to the 1980s. The situation varies according to location with some populations declining while others are stable or increasing.

Depending on the location, giraffes are threatened by one or more factors, primarily: habitat loss due to deforestation, expansion of agriculture and other human activities; illegal hunting (poaching) for meat and hide; and insecurity where giraffes become victims of armed conflicts.

Marwell has a long history with giraffe, the first arriving in October 1971, shortly before the zoo opened to the public. We currently have a group of five female giraffe. Four of them, Matilda, Makeda, Christa and Ruby were born at Marwell. Irsula arrived at Marwell in 2011 from Woburn Safari Park (UK). Born in 1997, Matilda is the oldest while Ruby is the youngest having been born in 2012.

Our giraffes have access to a large house for shelter, an all-weather outdoor hardstanding area and large paddock that they share with zebras and antelope. It includes sand areas for resting, a waterhole, trees and tall tree trunks used to hang up their regular supplies of Marwell grown browse (leafy branches).