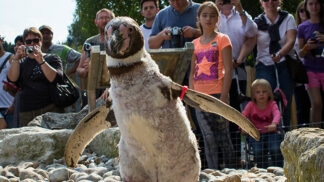 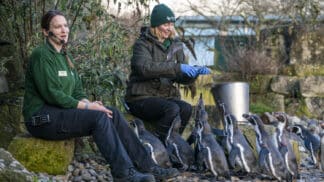 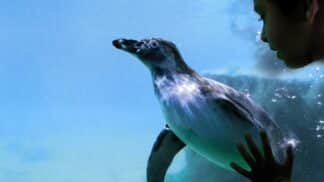 Humbolt penguins are fascinating flightless birds and are perfectly built for coastal living – nesting on land and hunting for fish in the open ocean.

Humboldt penguins are medium sized penguins from South America. They are greyish-black and white in colour, with a large pink area around the base of their beak. Unusually for birds, both male and female penguins look alike. Whilst they may not be able to fly like most other birds, they are very agile swimmers and almost seem to ‘fly’ through the water.

They have many adaptations to assist them in the ocean. Their bodies are streamlined to help them glide through the water smoothly and their wings have become more flipper- like to help them swim. Their webbed feet and tail are used like boat rudders to help them steer and make fast direction changes whilst chasing after shoals of fish. Most flying birds have very light bones so they are not too heavy to take off, but in penguins it is the opposite. Light bones would make penguins float but they need to be able to dive down to hunt their prey, so their bones are much denser than other birds. Humboldt penguins also have a special gland that allows them to drink sea water as well as fresh water. It then concentrates the excess salt out of the beak, so it looks like they are sneezing as it drips off their beaks.

They have very good long-distance vision and can see equally as well underwater as on dry land. Their feathers are specialised with a soft downy layer close to the skin to trap air, keeping them warm in the cold water. The outer feathers are small and stiff so fit together very well making them windproof, and when oiled through preening they are waterproof too. Like other birds they must moult their old feathers and grow new ones. Instead of losing and replacing a few feathers at a time throughout the year though, penguins moult and replace them all over the course of a few weeks. During this time, they are not waterproof and not well insulated so cannot go into the cold sea to hunt. They will not be able to eat during this time. 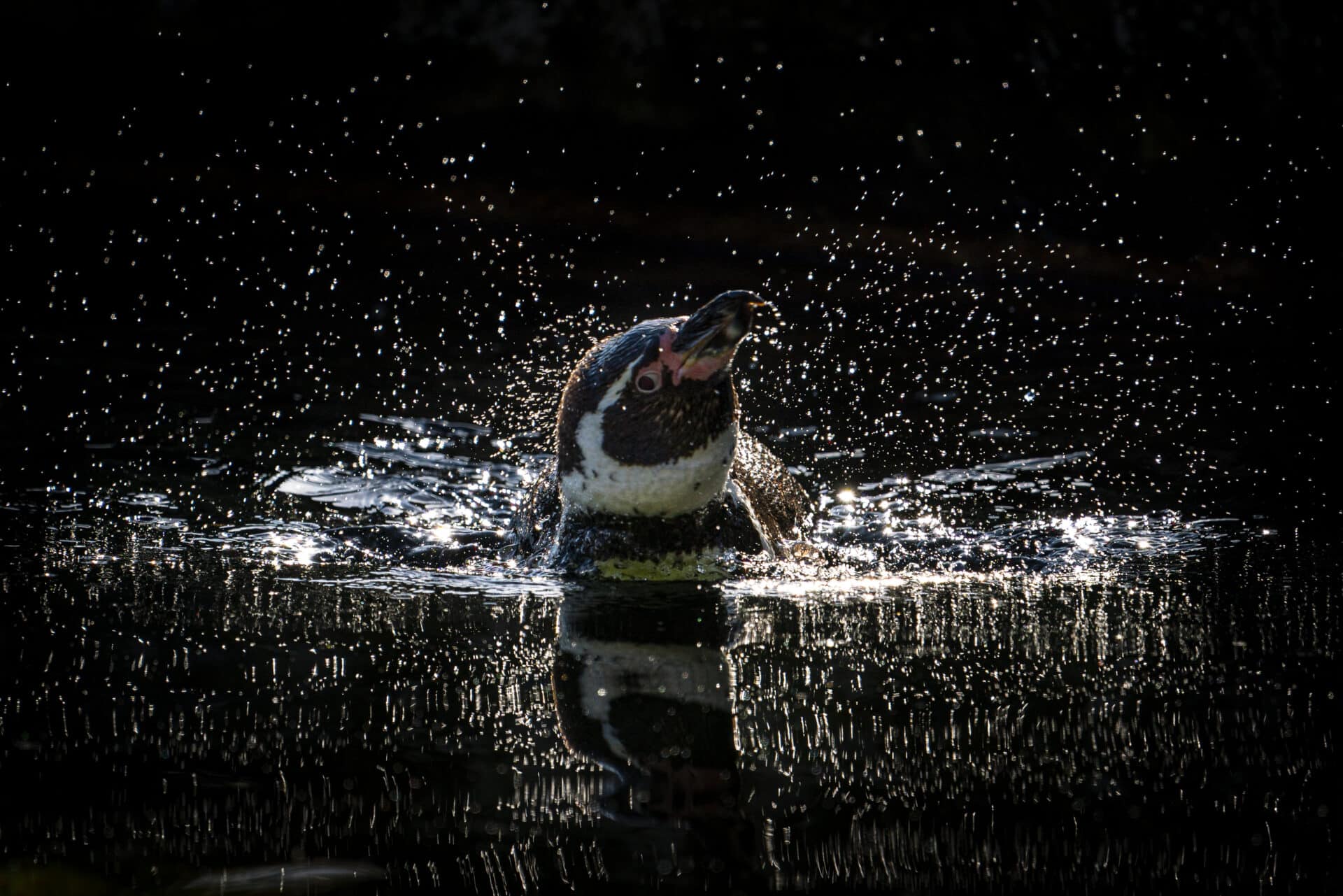 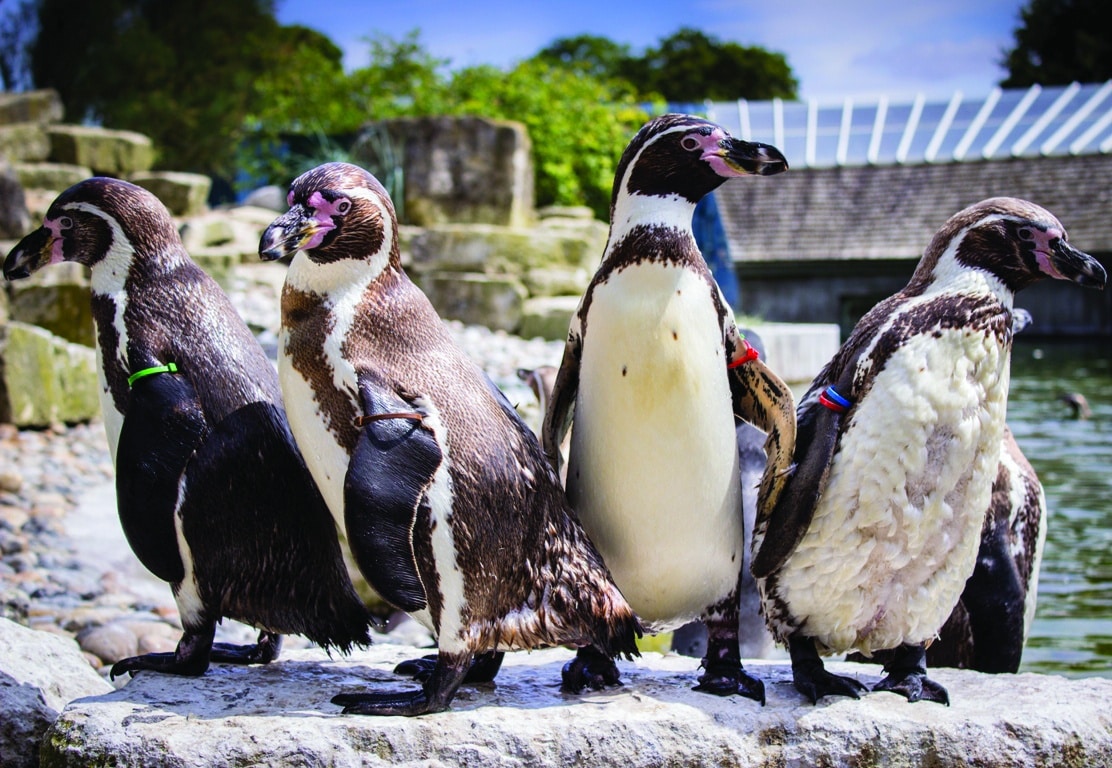 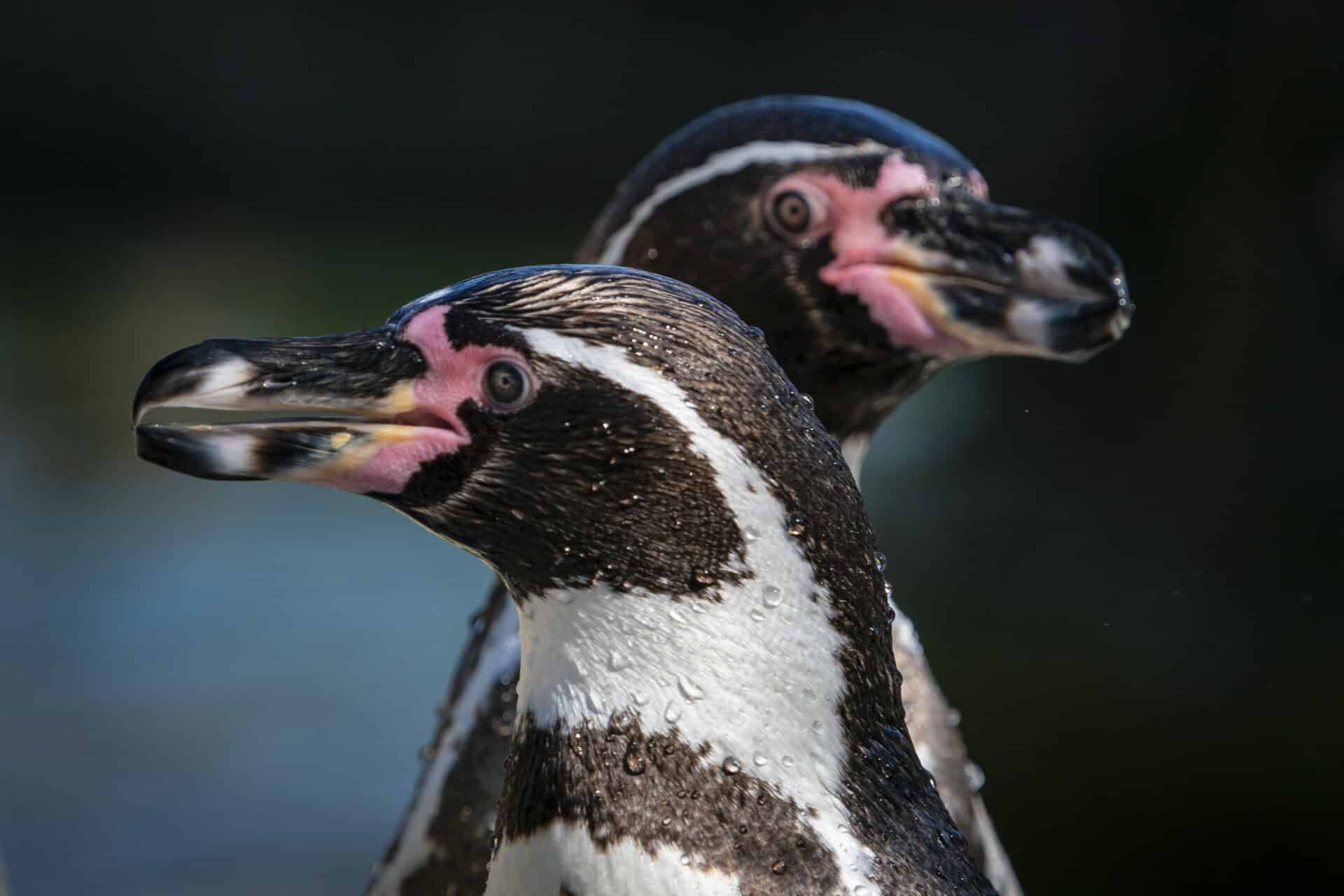 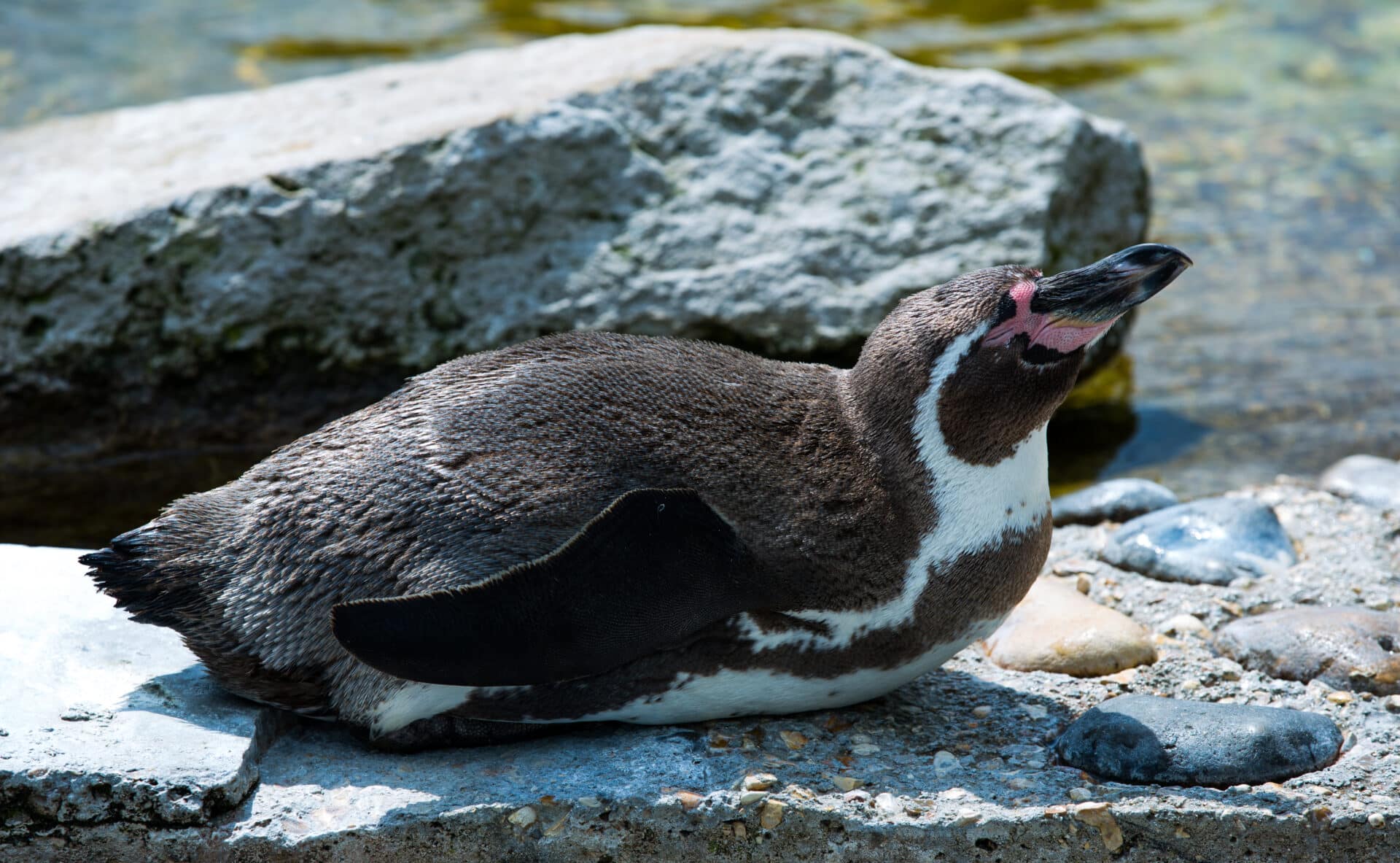 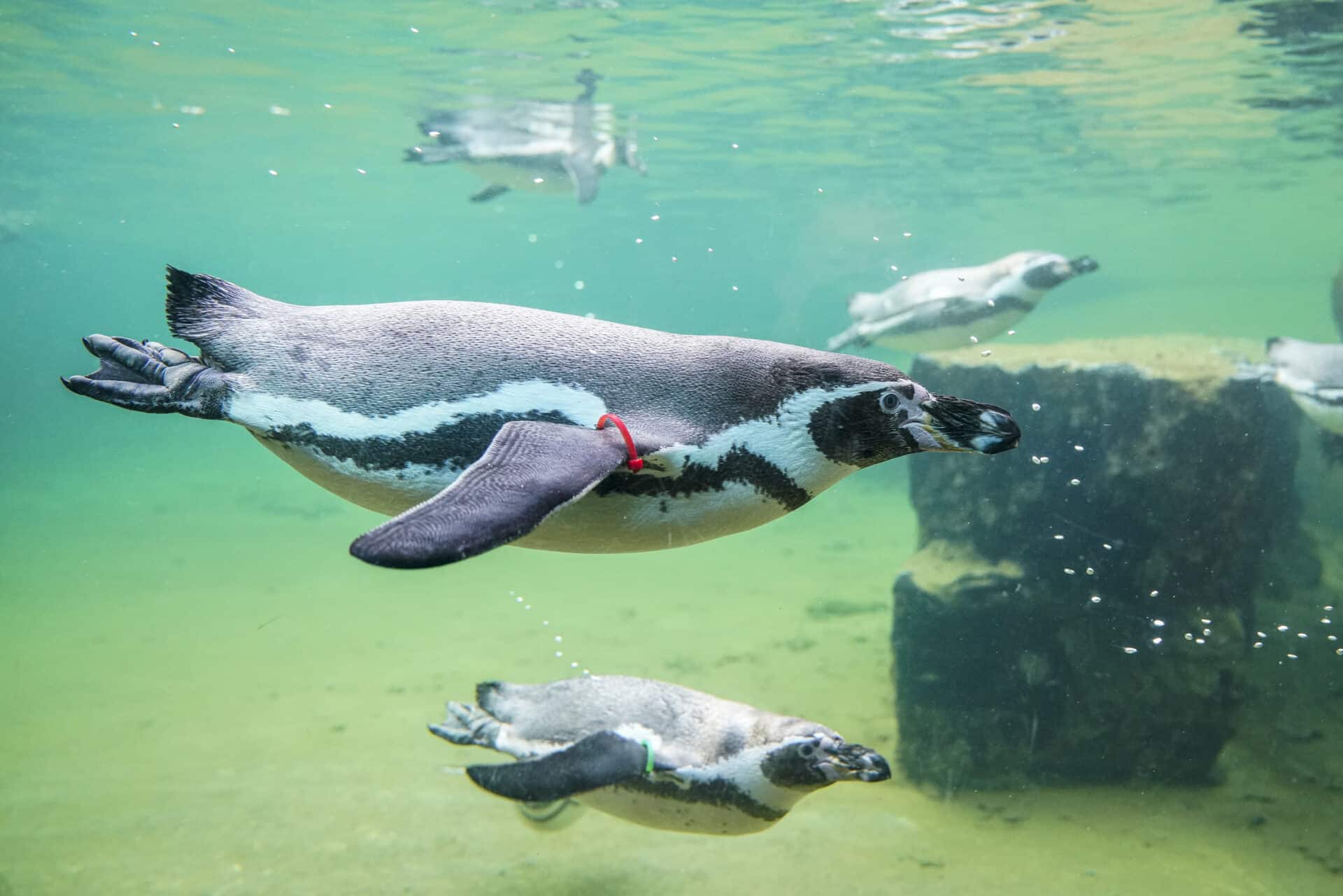 Humboldt penguins mainly eat fish, such as anchovies, herring, pilchards and hake, as well as squid. They catch their prey by diving underwater and chasing after it. Most dives are to around 30m depth – this is the same length as 3.5 double decker buses end to end going down into the water. They dive down and then fix their sights back on a prey fish highlighted above them at the surface. As the penguin rises to the surface they catch the fish in their beak, from below.

As birds they don’t have any teeth, but penguins do have lots of backwards facing spines on the inside of their mouth and covering their tongue. These sharp spines allow them to get a good grip on the wriggling fish, and they swallow it whole while still swimming.

Mention penguins and people automatically think of snow and ice, but many of the world’s penguin species never experience ice. The Humboldt penguins are marine species from the sub-tropical and temperate coasts of Chile and Peru in South America.

For Humboldt’s living at the northern part of their range, nearest the equator, air temperatures are similar to UK summers (average 23C), but all year round. For Humboldt’s living in the southern part of their range, temperatures are cooler (average 9C), again staying quite similar all year round. Though the weather might be fairly warm, the water is cold as all penguins live near nutrient-rich cold ocean waters or currents. These upwellings of deep cold water bring nutrients up to the sunlit surface. Here large numbers of plankton can use the sunlight and nutrients to grow and reproduce. These large masses of plankton are preyed on by shoals of fish, which are themselves preyed upon by the penguins. The cold ocean current where the Humboldt penguins are found is called the Humboldt current.

As a top predator, penguins are important parts of marine ecosystems, and their numbers are indicators of the health of those ecosystems. Though a fearsome predator themselves on fish, these penguins are also prey. They are hunted by predators from the land, sea and sky. On land penguins are taken by culpeo (Andean foxes), and their nests can be raided by gulls, vultures or introduced rats (non-native species).

Whilst they may retreat to the sea to escape one predator, they can end up in danger from hungry sharks, orcas and fur seals, awaiting the Humboldt’s in the ocean.

To stay safe when in the ocean, penguins have a form of camouflage known as ‘counter shading’. This is where the upper side of the body is darker than the underside. If a predator was to look up from the depths of the ocean, then the penguin’s white chest would blend in well with the sunlit surface of the water, making the penguin hard to see.

If the predator was looking down into the sea, then the penguin’s black back would blend well with the dark, depths of the ocean. This counter shading will also help camouflage the penguins when they are hunting as they have been shown to dive down and then fix their sights on a prey fish highlighted above them at the surface, catching the fish from below as they rise back up to the surface.

Humboldt penguins are social birds, nesting in small colonies on rocky coastlines and on islands along the shores of Chile and Peru. They are typically monogamous, meaning that they mate with the same partner for life. They can recognise their mate within the colony of birds by their loud calls and by looking at the unique spot patterns on their chest. They have a good sense of smell so may also be able to recognise their mate through their scent.

They can breed anytime of the year if resources such as fish stocks are available. The female will lay up to 2 eggs in a crevice amongst boulders or in a burrow which is dug out from deposits of old guano (seabird droppings). The nest may be lined with items such as feathers driftwood, plants, and pebbles. Both parents will take turns to incubate the eggs for around 40 days, and care for the young once hatched. Humboldt penguin chicks will leave the nest (fledge) from about 3 – 6 months old when they have grown their own waterproof feathers and can hunt their own food. They may still be fed regurgitated fish by their parents until they are 6 months old.

Humboldt penguins face several threats. These include entanglement in fishing nets, nesting site loss through harvesting of guano (seabird droppings) for use as fertiliser, hunting by humans for food (eggs) and the pet trade, and being hunted by introduced species such as rats, cats and dogs.  More recently, overfishing is believed to be causing a decline in the numbers of this species, particularly in El Nino event years, a climate pattern when the temperature of the ocean increases leading to decreased food availability for penguins.

Conservation measures that are in place to help this species include regular monitoring of colonies in Peru and Chile, the creation of protected nesting and foraging areas, and the removal of rodents from some nesting areas. Humboldt penguins are already listed on the international endangered species CITES treaty as Appendix 1, which means they cannot be traded between countries, and they are protected in most of their range countries.

A colony of Humboldt penguins have been living at Marwell since 2000. Their home consists of a deep pool with a pebbly beach, a stream, nest tunnels between rocks, boulders, plant cover and soil to make their own scrapes in. An underwater viewing area allows visitors to watch their incredible agility as they zoom around underwater.

The keepers have noticed that the penguins particularly like to ‘porpoise’ (a type of fast swimming whilst jumping in and out of the water) when excited, hungry or during windy and rainy weather. They can tell the penguins apart using the individual spot patterns on the penguin’s chests, or by the colour-coded bands the penguins wear at the base of their wings.

Here at the zoo the penguins are fed twice a day with herring. They are also part of the Humboldt penguin EAZA Ex-situ Programme (EEP). Through these European breeding programmes the species coordinator uses data from the studbook to manage the non- wild (Ex-situ) populations. They make sure they are stable, self-sustaining, and healthy populations, that can act as a genetic backup to wild (In-situ) populations. This means the Ex-situ population could also be a source of animals for any potential reintroductions back into the wild. With advice from the expert Committee members for that species, the coordinator generates and shares information on husbandry, research, and conservation activities.