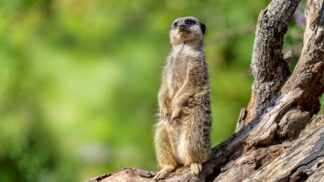 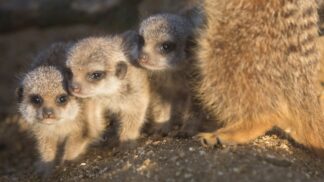 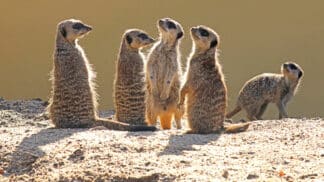 These group-living, small mammals work together to survive life in their dry African homes and are famous for their cooperative behaviours.  Meerkats are a type of small, diurnal (day active) mongoose. They have coarse grey-brown fur, with darker broken stripes across their backs, and distinctive black eye patches. Their tails are slender rather than bushy and have a black tip at the end.

They have more rounded skulls and larger more forward-facing eyes than mongoose usually have. This gives them better binocular vision, making them good at judging distances. This skill is important when the meerkats are carrying out sentry duty, looking out for potential predators.  Meerkats have strong forelimbs with long claws for digging. They are able to close their ears like other burrowing mongooses, to stop soil getting into them. 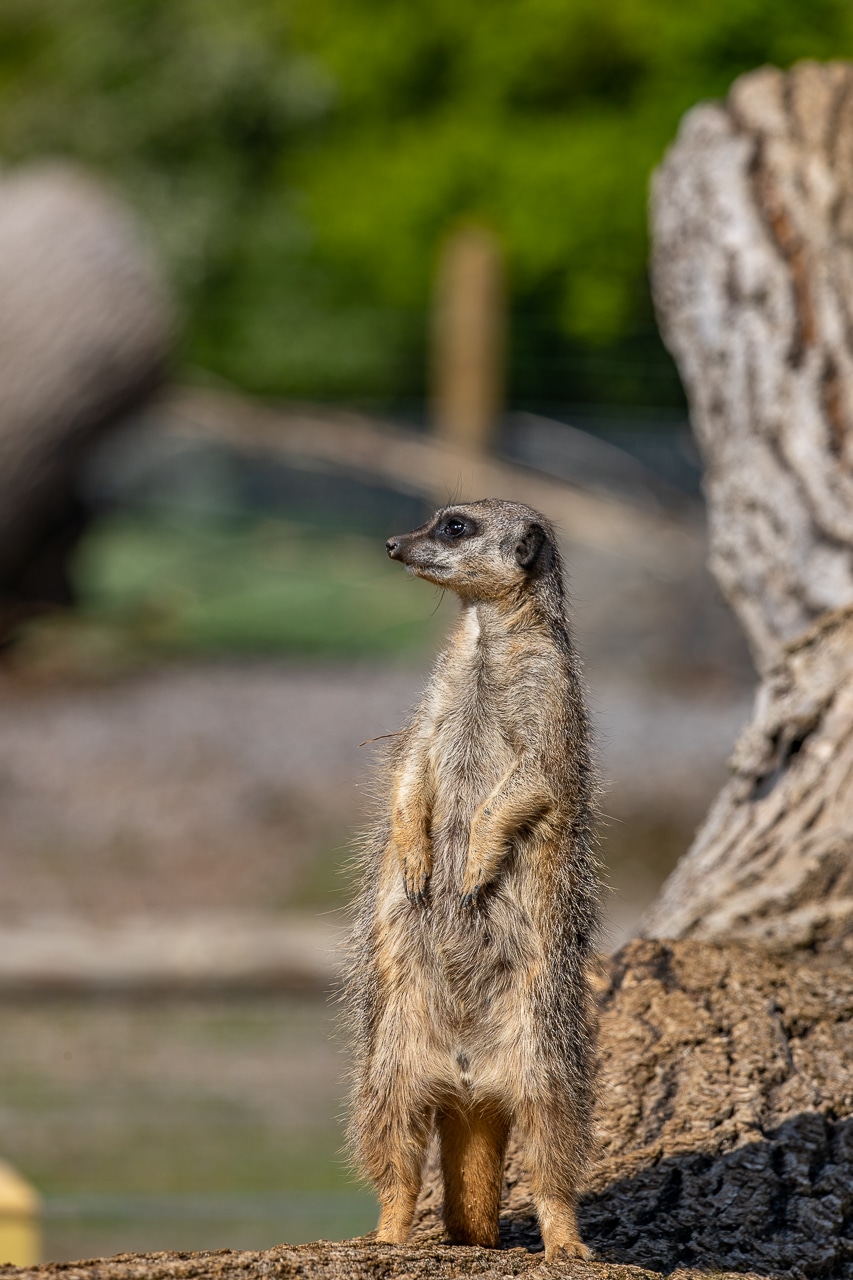 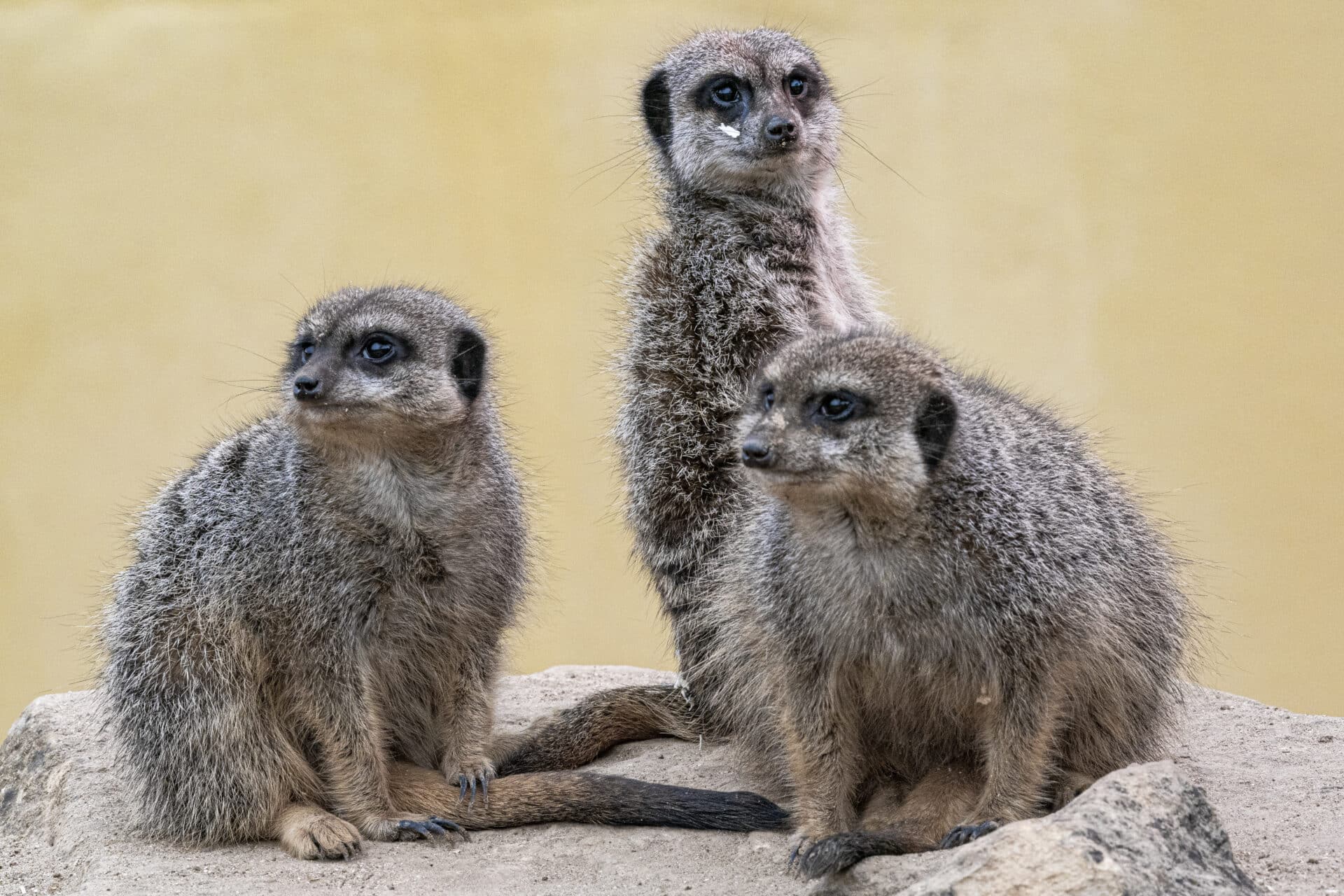 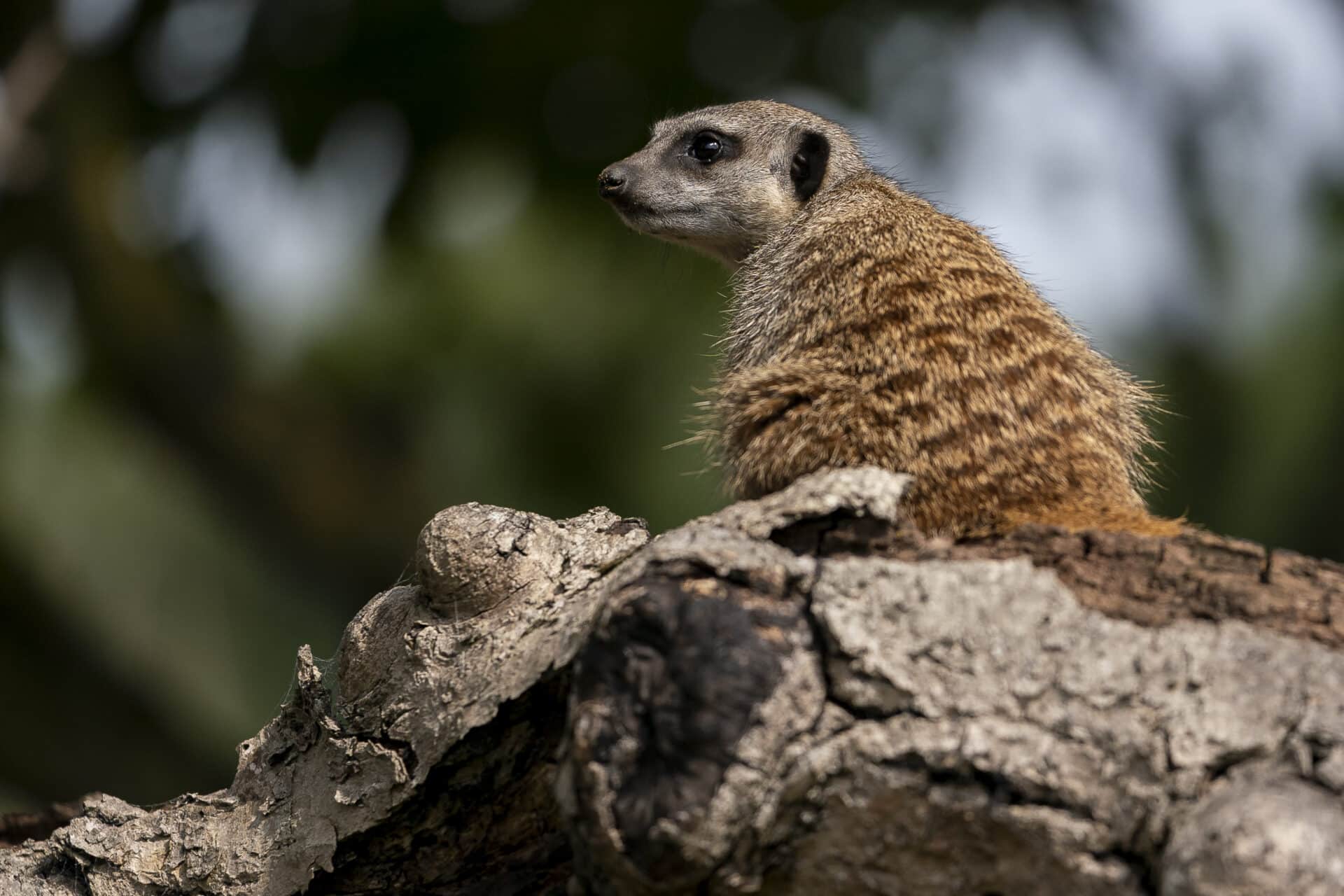 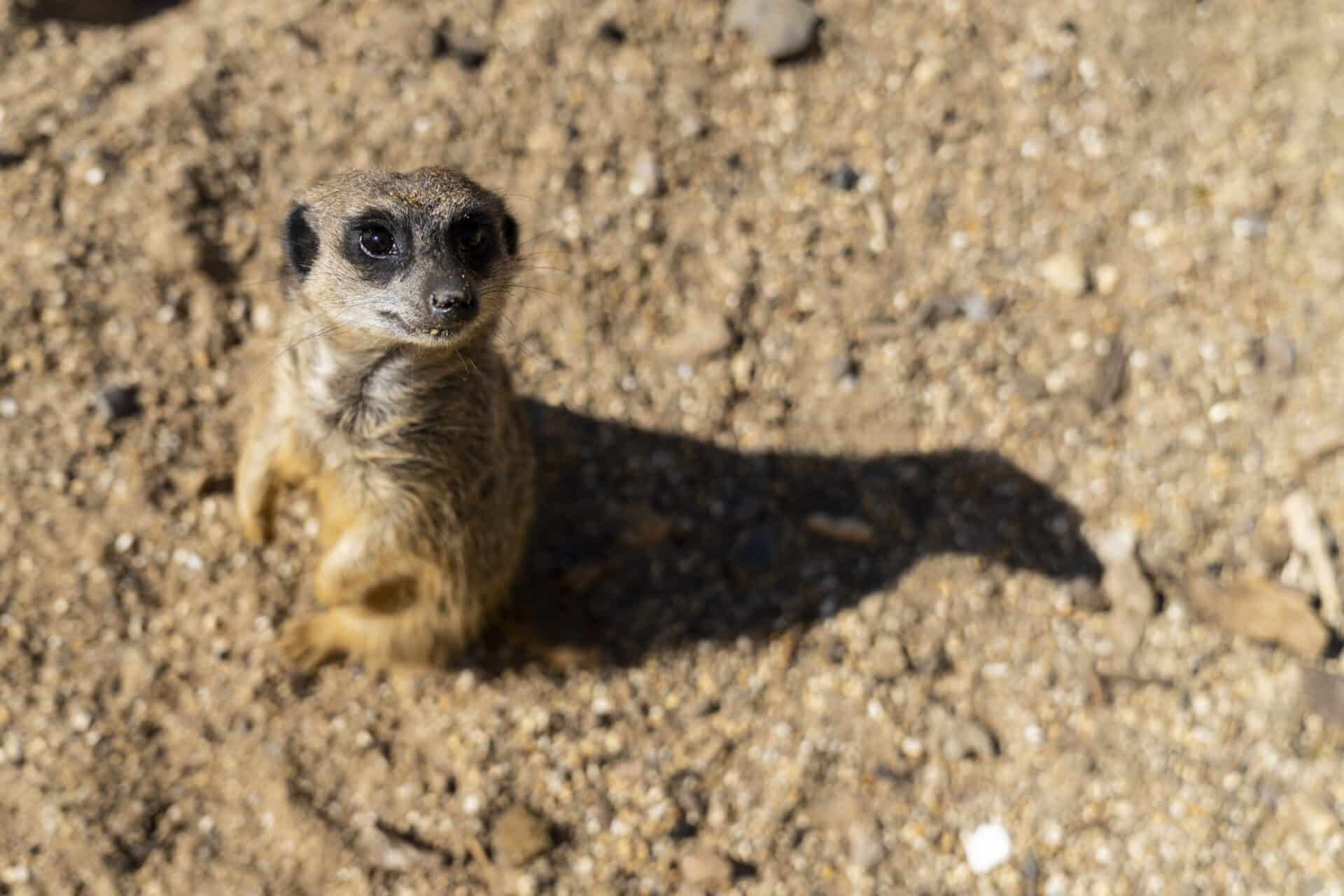 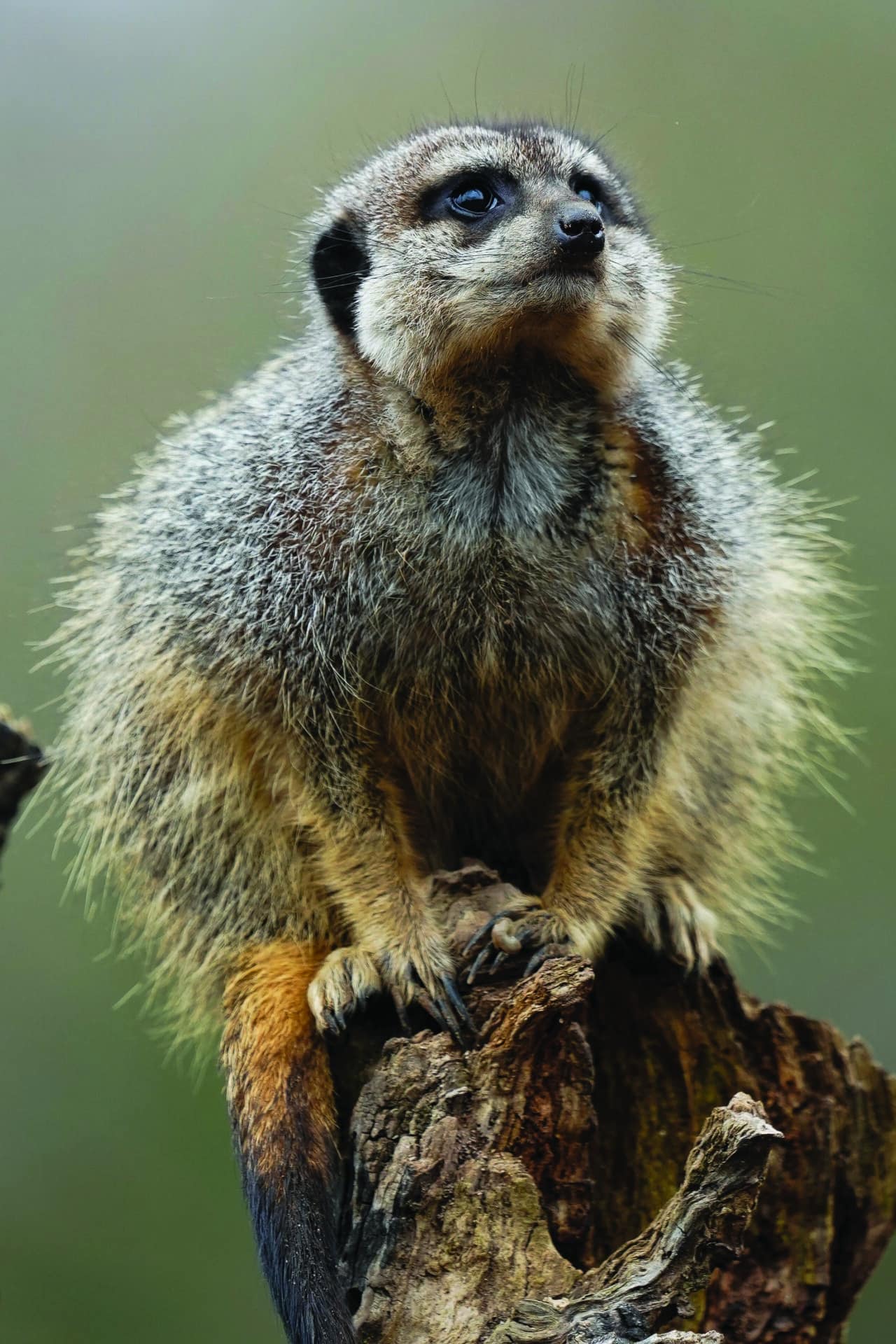 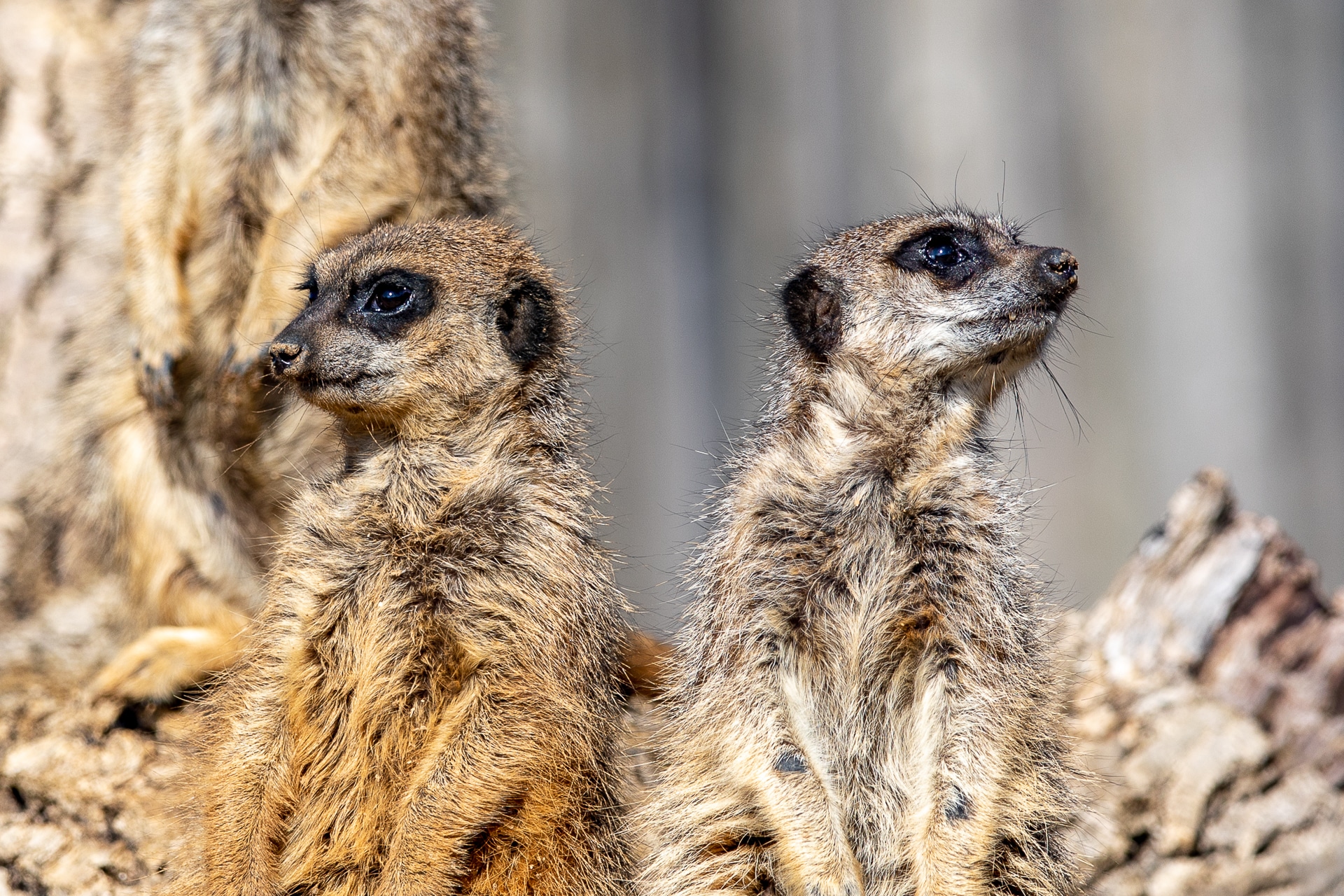 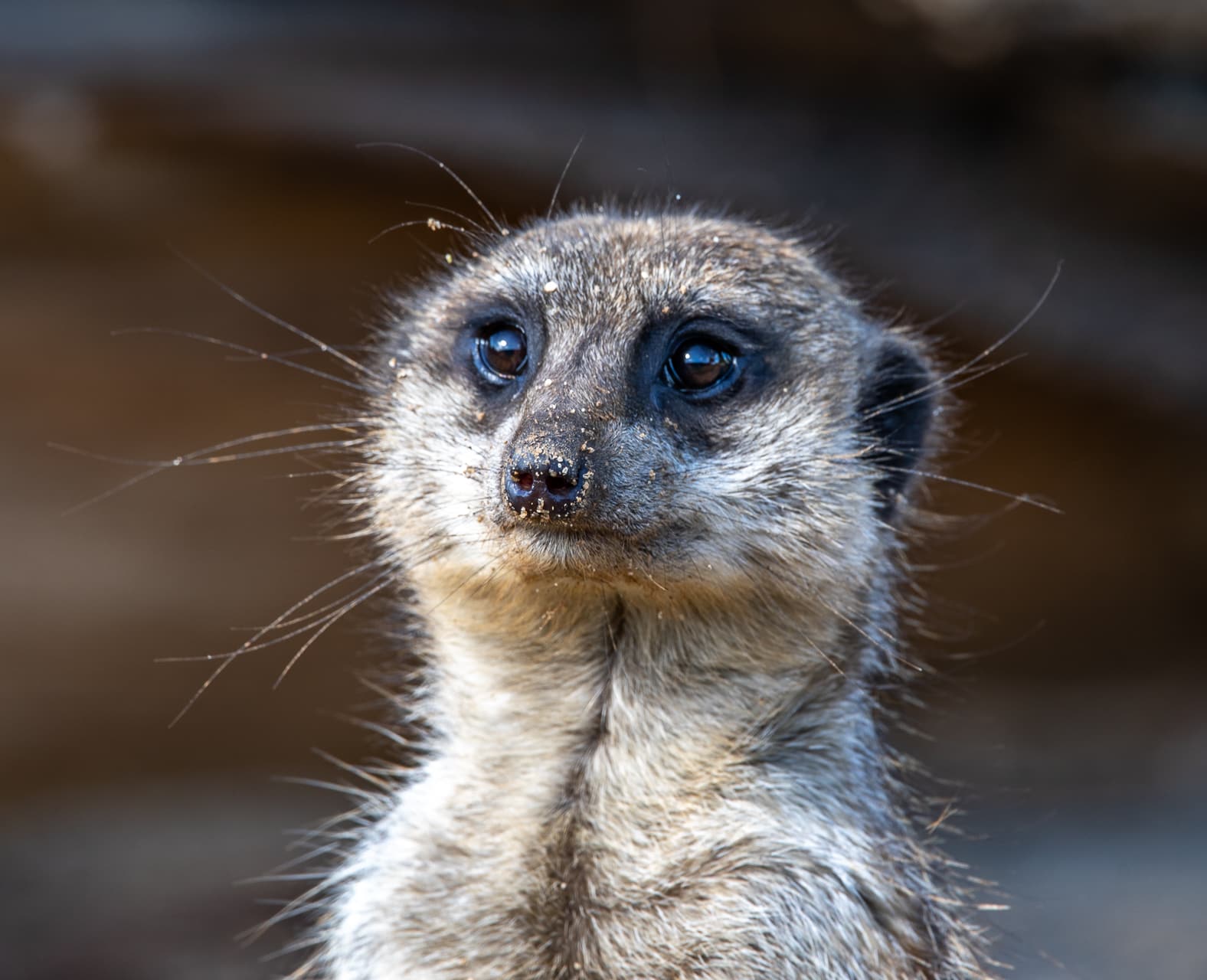 Meerkats mainly eat invertebrates, particularly insects like beetles, but also spiders, termites centipede larvae and scorpions. They will also occasionally eat vertebrates like lizards and small snakes. In the dry season they may eat juicy plant tubers for extra moisture.

After grooming and basking in the morning sun to warm up, meerkats usually spend about 5-8 hours a day individually foraging for prey as a loose group. Their long nose gives them a good sense of smell and is used to sniff out prey. They move around on all fours, as they rake through the soil and dig prey out of crevices or from under rocks and logs with their sharp claws.

Meerkats are widespread in the dry, open savanna, grassland and desert areas where they live in southern Africa. Temperatures in the summer can get as high as 40C, while overnight frosts in the cool season are also common. The underground burrows the meerkats inhabit are important for their survival, providing shelter from the frosts and cooler weather, and as shade from the strongest summer sun during the day.

Sharp claws make meerkats good at digging, so they can dig their extensive burrows themselves, or they move into burrows left by other animals. Their large territories will contain several different burrow systems which they may only stay a few nights in, before moving on to one of their other burrows.

Snakes, jackals and eagles are the main meerkat predators, so they can be attacked from the ground or sky. Meerkats take turns to guard the rest of the group, remaining alert for any predators whilst the others are busy looking for food. These ‘sentinels’ often find a high point, such as a mound or bush where they have a good view and stand up on their hind legs for extra height, using their tail for support. Meerkats have good vision, helped by the dark patches of fur underneath their eyes which are thought to reduce the sun’s glare. This helps them to see in the bright sunlight like a pair of sunglasses might help us. If the sentinel sees a predator, they let the rest of the group know by calling out an alarm.

Researchers have identified different meerkat alarm calls that describe different predators and the different actions to be taken. This might be to rush into the nearest bolthole or tunnel for cover, to crouch and freeze, or it might be to group together and mob a predator like a large snake, to scare it off.

These charismatic animals are very social, living in groups of up to around 50 individuals. Smaller, often extended family groups are more common, led by a dominant male and dominant female pair. Meerkats are famous for their cooperative behaviours with non-breeding adults helping to rear the offspring of the dominant pair, and all adult members taking their turn watching out for the safety of the group while foraging for food.

Generally, only the dominant male and dominant female of a group breed. This can happen at any time of the year, but more often during the rainy, warmer season. After a gestation of around 2.5 months, usually 3, but up to 7, pups are born in a litter.  3 litters per year can be born. The helpless pups are born with their eyes and ears closed so remain in their underground den until they are 3 to 4 weeks old. Other members of the group help care for the dominant female’s young. These helpers babysit, groom, feed and protect the pups.
They also help to teach them foraging skills when they are old enough to join the group on foraging trips. Helpers initially give young pups dead, broken-up prey items, moving onto disabled live prey, until eventually just signposting prey not even completely dug out of the ground for the pups to hone their skills on.

Meerkats are mature at about 1 year old, and young males leave their family group between 1 – 2.5 years old. They will replace a dominant male in another meerkat group, or they will make a new group with any females they come across that are not related to themselves.

Meerkats have been living at Marwell since 1982 with many pups born here. Marwell is currently home to a bachelor group of male meerkats.

Their enclosure is lightly planted, mainly bare sandy soil. This is similar to their wild habitat and provides them with plenty of opportunities to dig. They are fed an insect-based diet which is scattered throughout the enclosure for them to hunt for. Sometimes the insects are put into bamboo tubes or holes in logs so that the meerkats need to sniff them out and then manipulate the log to get to the food. This helps to replicate how the meerkats would dig out and turn over stones and logs to find their prey in the wild, encouraging them to use their senses and natural behaviours. Our wet winter climate is quite different to the dry African climate meerkats have evolved to suit. There are heat lamps available for the meerkats to help keep them warm when the weather is cold. There are also sheltered and indoor areas for the meerkats to retreat to if they need to keep warm or dry.