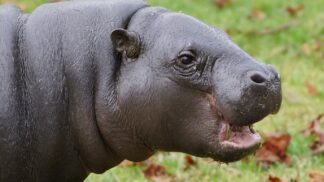 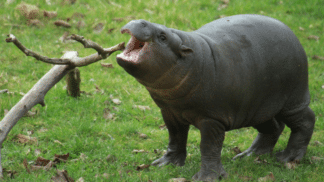 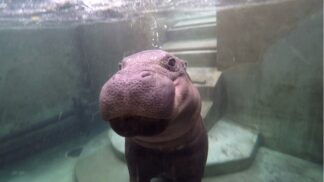 Pygmy hippos are more solitary, and more land-based (terrestrial) than their larger, river-dwelling Common hippo relatives. They are adapted to living in a forest environment, with a smaller body and head for weaving through the vegetation, and longer legs. Their feet are also less webbed, reflecting the greater amount of time they spend walking on the ground.

Often most active at night (nocturnal), these secretive mammals spend the day hidden, resting in swamps, wallows, or thick vegetation. They do not have sweat glands in the skin so cannot cool themselves through sweating as we do. Instead, they avoid the harsh sun, bathe in water, and produce a shiny fluid from their skin which protects them against sunburn and infections. This can make the pygmy hippos appear rather oily.

Their closest relatives are the larger Common hippos Hippopotamus amphibius, but they differ greatly to them. Although not closely related, pygmy hippos are actually fairly similar in size, shape, habitat, diet and behaviour to the tapirs of South America.

Outside of the hippo family (Hippopotamidae), pygmy and common hippos’ next closest relatives are whales. 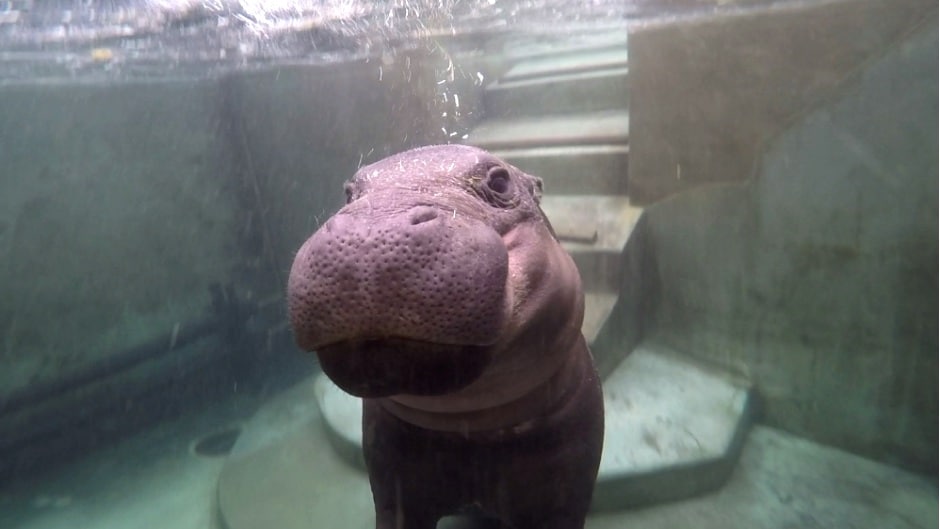 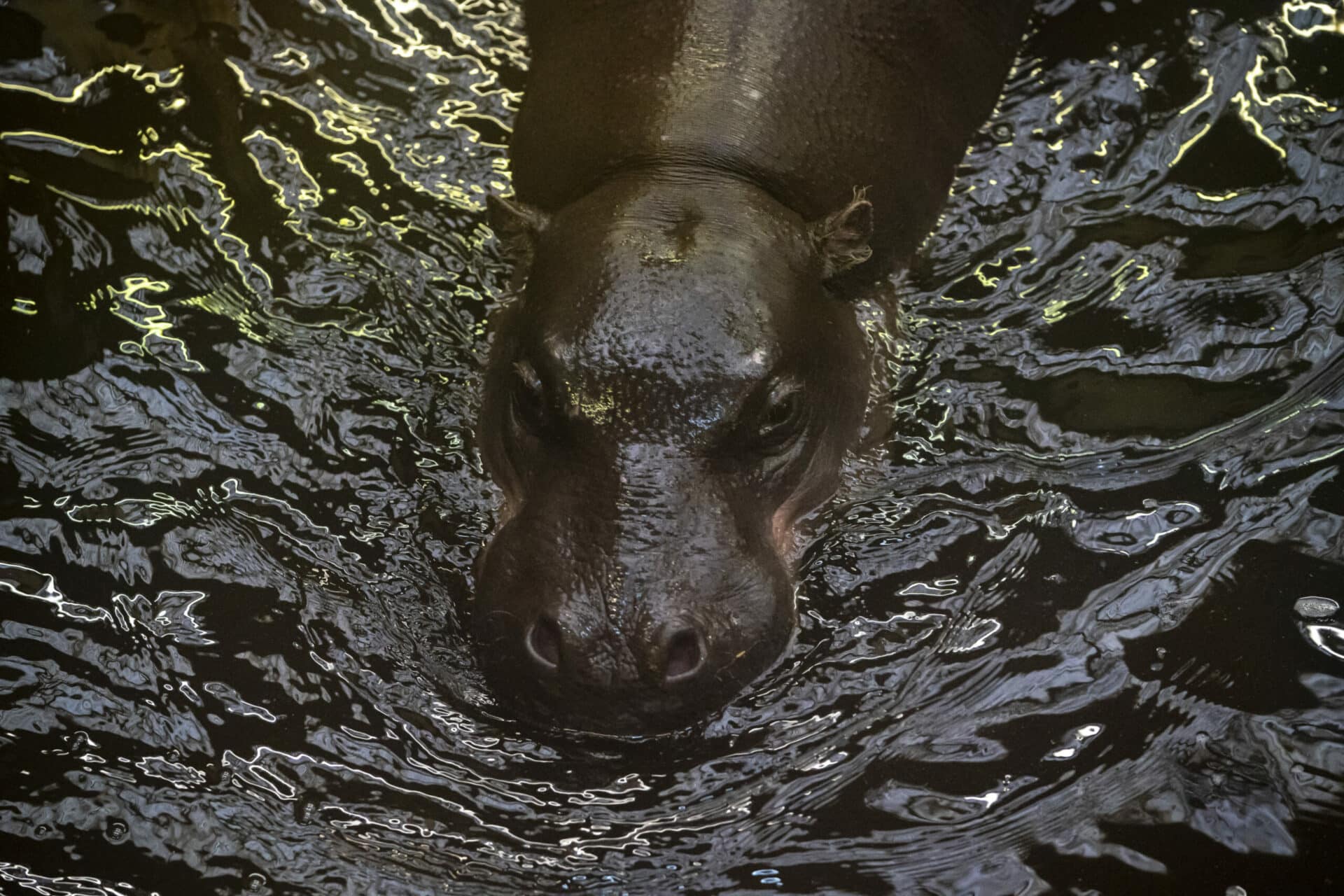 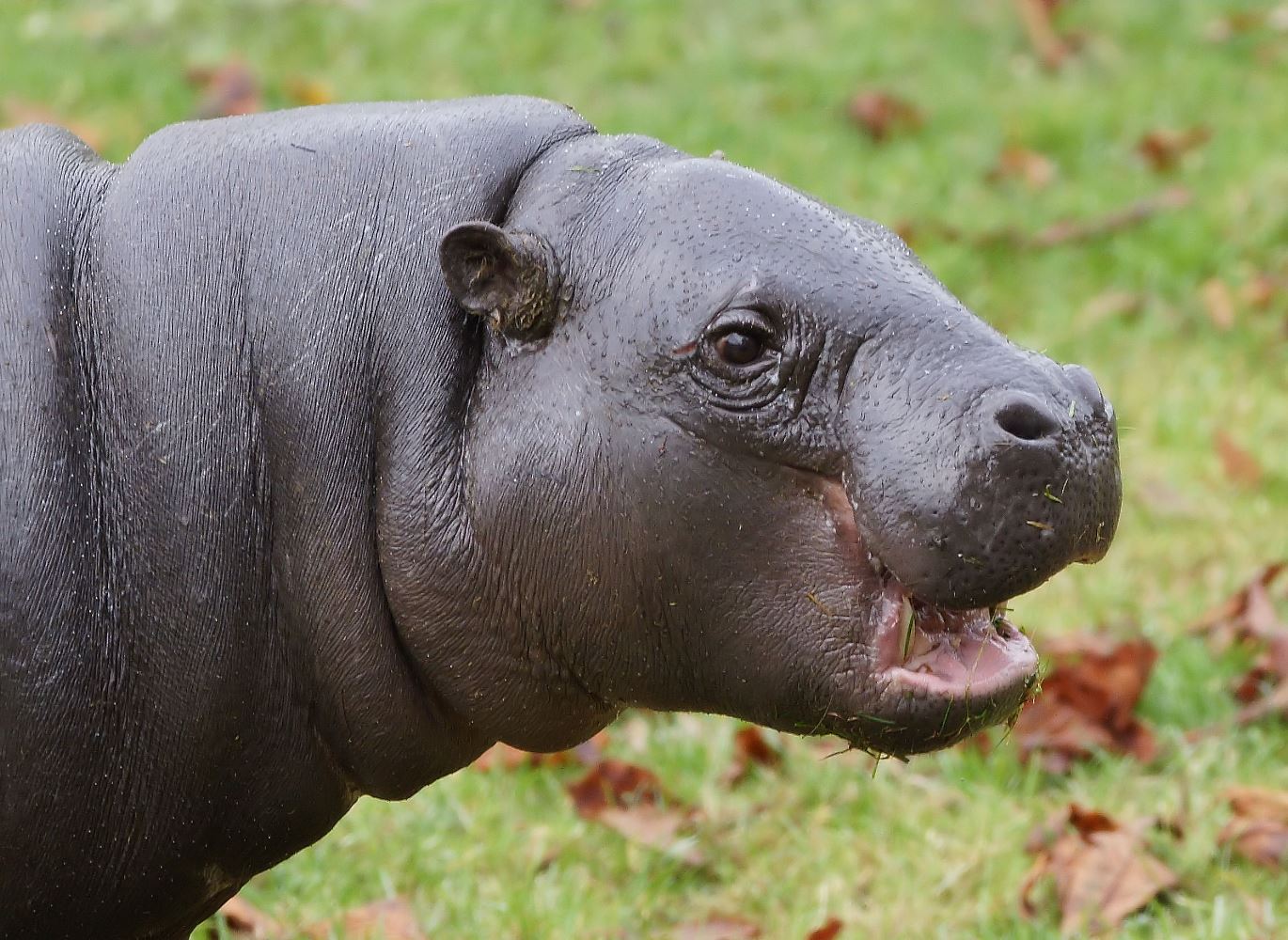 Don’t let their large canine tusks fool you – pygmy hippos are herbivores not carnivores. They use their canines for defence, not catching prey.

Pygmy hippos are browsers and feed on a variety of vegetation, including leaves, semi-aquatic plants, fallen fruit, roots and tubers. They use their strong, muscular lips instead of their teeth to tear the vegetation. They feed for around 6 hours per day, anytime from the afternoon into the night. They have even been seen standing on their hind legs to reach tasty ferns growing in Raphia palm trees.

Pygmy hippo’s are found in Côte d’Ivoire, Guinea, Liberia and Sierra Leone, all in the so-called Upper Guinea Forest of West Africa.

They live in tropical forests close to streams and swamps, but are rarely seen in the wild. The temperature is fairly constant, at around 20C all year, with the dry season from November to March.

Usually at night, they will follow well-trampled trails through the forest to forage, marking them with their scent as they go. To do this they may leave piles of poo by the side of the trail or spread their dung along it by vigorously swishing their tail as they poo, spraying poo all around! One study suggests males may have home ranges of up to 2 sq.km, but female ranges are probably only a third of that size. While more adapted to land they are still at home in the water, with special muscles in their ears and nostrils that mean they can close them when they submerge underwater! They don’t free swim much underwater. Instead, they slowly move along the bottom of the stream or swamp.

There is little information available about the predators of pygmy hippos, but potential predators include leopards and crocodiles.  Young pygmy hippos may be preyed upon by a larger variety of predators, including African golden cats, African civets and African rock pythons.

Due to their elusive nature and the heavily forested regions they occur in, little is known about some of the habits and behaviour of pygmy hippos in the wild. They are thought to be more solitary, living alone or in pairs of a mother and calf. The information we do have mostly comes from captive animals. Mating occurs on land or in water at any time of the year.

After a gestation of around 6 months, females give birth in shallow water or on land to a single calf weighing about 5 kg at birth. Usually one calf is born, but twins occur very occasionally. Mothers will leave their calves hidden in pools while they forage for food, returning every few hours to allow the calf to suckle their milk. Calves start following their mother at around 3 – 5 months old, when they start feeding on vegetation. The young are weaned from milk by about 8 months of age but may stay with their mother until they are several years old. They reach maturity at around 3-5 years of age.

Pygmy hippo numbers are decreasing rapidly and there are just over 2,000 mature individuals remaining. The main reason for the decline of pygmy hippo numbers is loss of their habitat. Forests they depend on are being removed to use the trees for wood or growing maize, oil palms or coffee instead. Forest is removed to create space for building roads and settlements while rivers are changed because dams are built.

Pygmy hippos are protected by law in all the countries they are present in, although the enforcement of this is probably limited due to civil unrest and lack of resources. They are listed on the international endangered species CITES treaty as Appendix II, which means that trade in any parts of the animal is restricted. Many pygmy hippos live in protected areas and the focus of current conservation efforts is to get more detailed information on the local situation pygmy hippos live in and establish effective management of their remaining habitats.

Pygmy hippos have been living at Marwell since 1983. They even received royal approval when their house was officially opened by HRH the Duchess of Kent in 1984. Their indoor house includes deep pools served by a large filtration system. This helps to clean the water so we don’t need to replace it with fresh water so often, saving not only water but also the energy needed to heat new water to the correct temperature.

The outside exhibit has been newly extended and planted with trees to allow better protection for the hippos from the sun. Marginal wetland areas have been put in place and planted to mimic the edge of stream and rivers of their natural habitats. The waste water from the inside pools is used to water these outside wetland areas, further reducing our use of water.