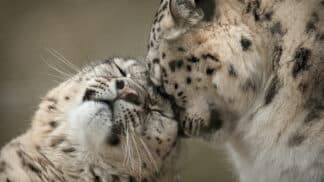 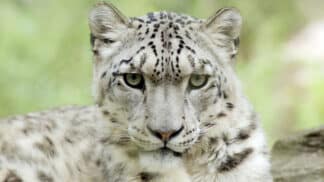 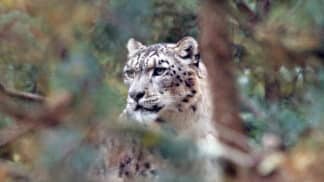 Medium sized members of the cat family, these sure-footed hunters are perfectly adapted for life at the top of the food chain and atop the world’s highest mountains.

Their smoky grey, spotted upperparts and white underparts camouflage well against the harsh stony mountain and high-altitude forest backgrounds that they are found in. Their long, uniquely patterned fur gives them a stocky appearance, with large, broad feet and a long, thick tail almost the same length as their body.

They have well developed chest muscles so they can take in more oxygen from the thin mountain air with each breath. Short, wide tubes in their nose warm the cold air they’re breathing in before it gets to their lungs, and also removes heat from the air before it’s breathed back out and wasted.  These expanded nasal cavities mean the snow leopards have a short muzzle and higher domed forehead. Having small, rounded ears means less precious body heat is lost from them to the cold outside air.

Despite their common ‘leopard’ name, snow leopards are actually more closely related to the tiger than other leopards, having split off from the rest of the big cat family over 2 million years ago. 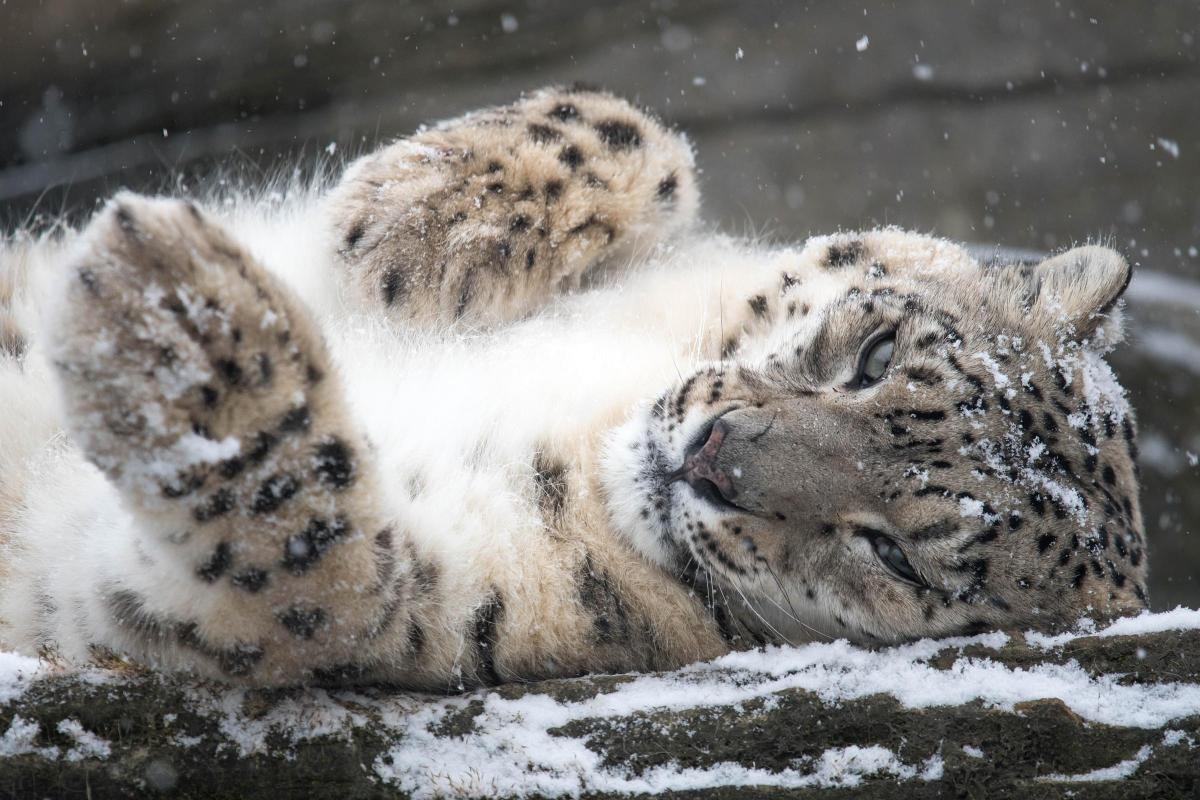 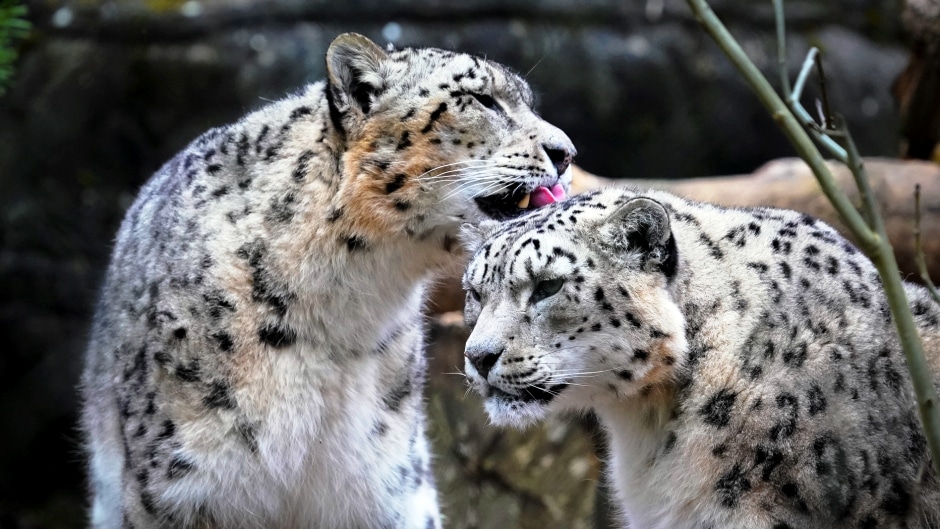 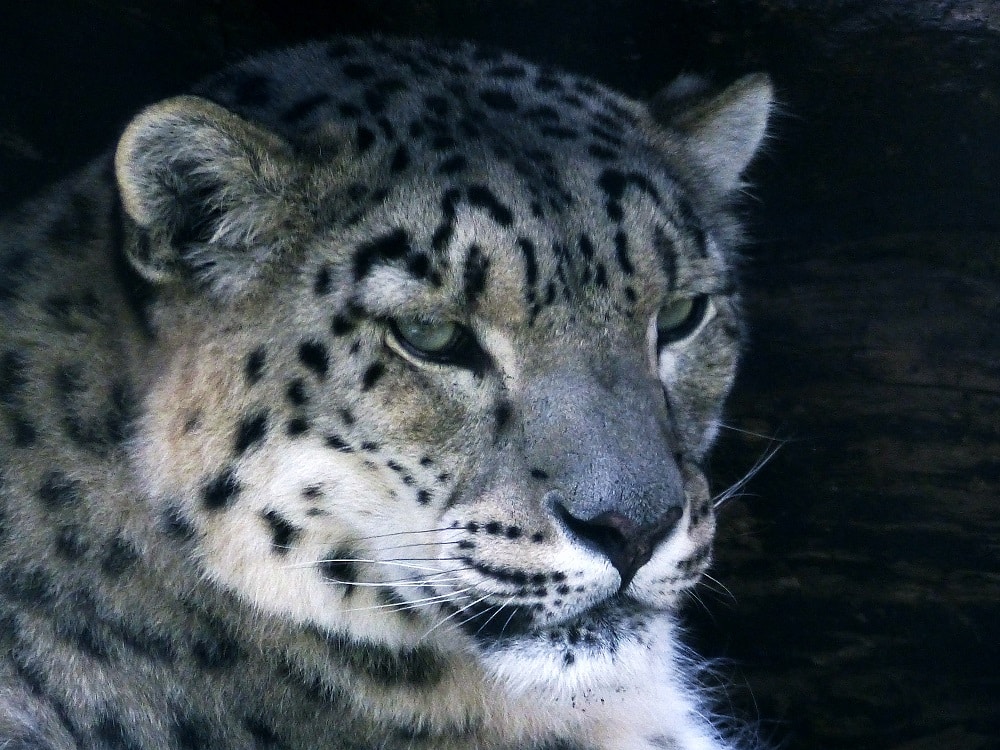 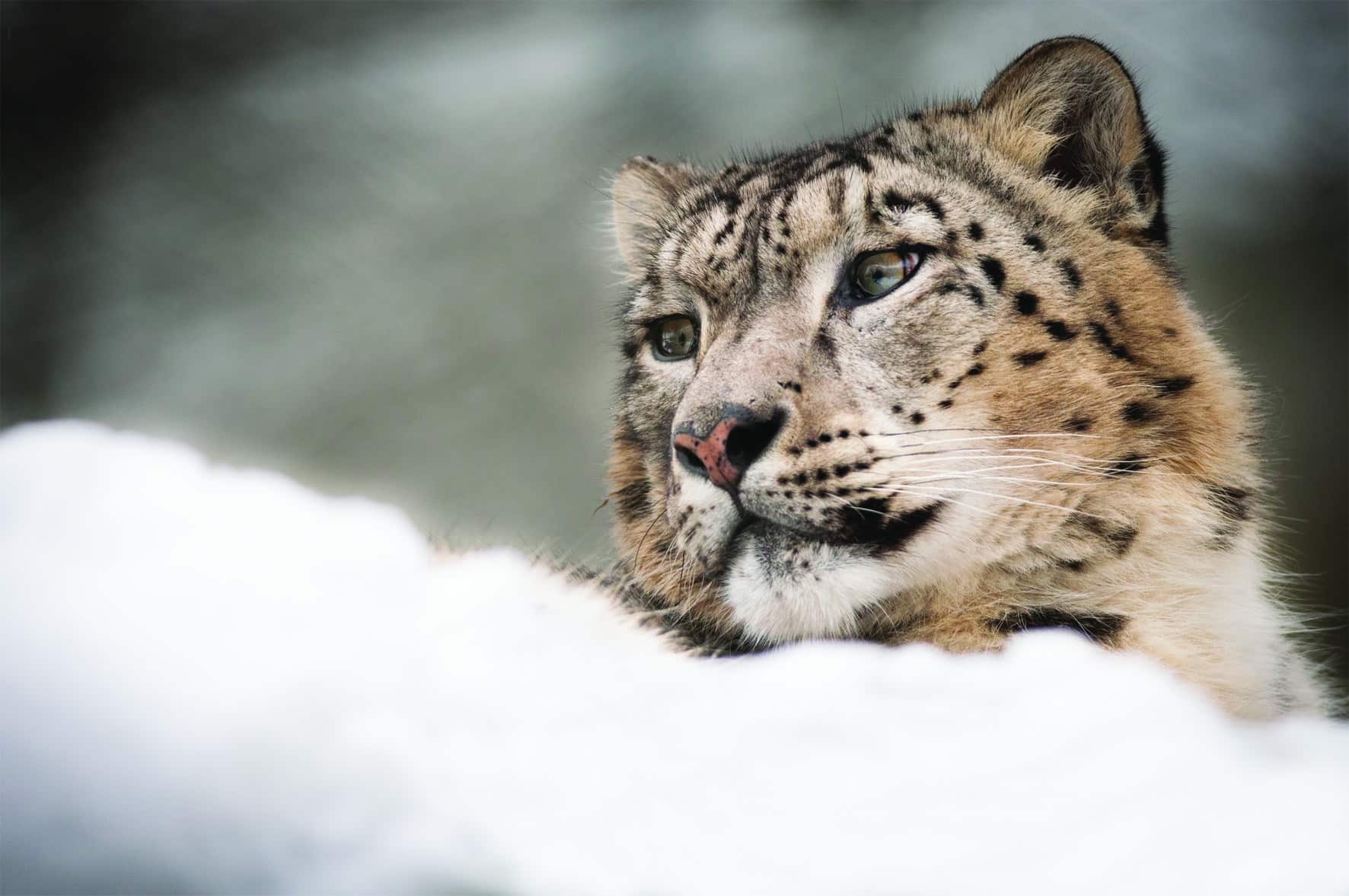 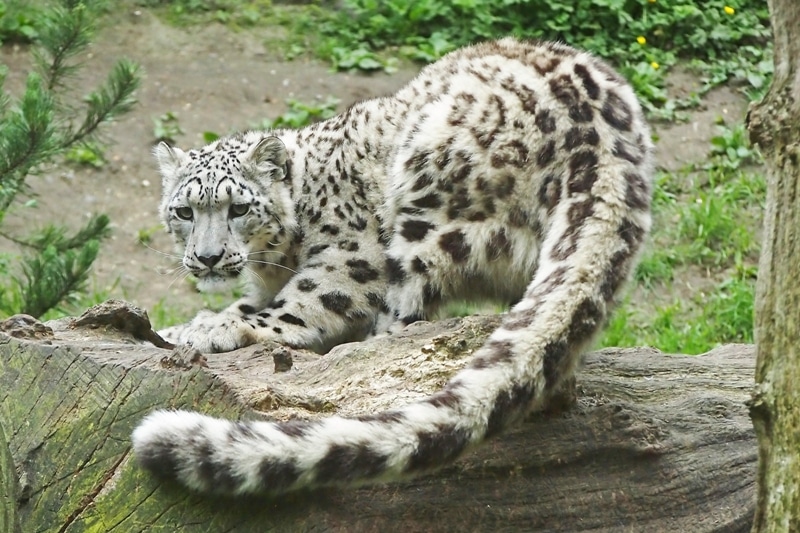 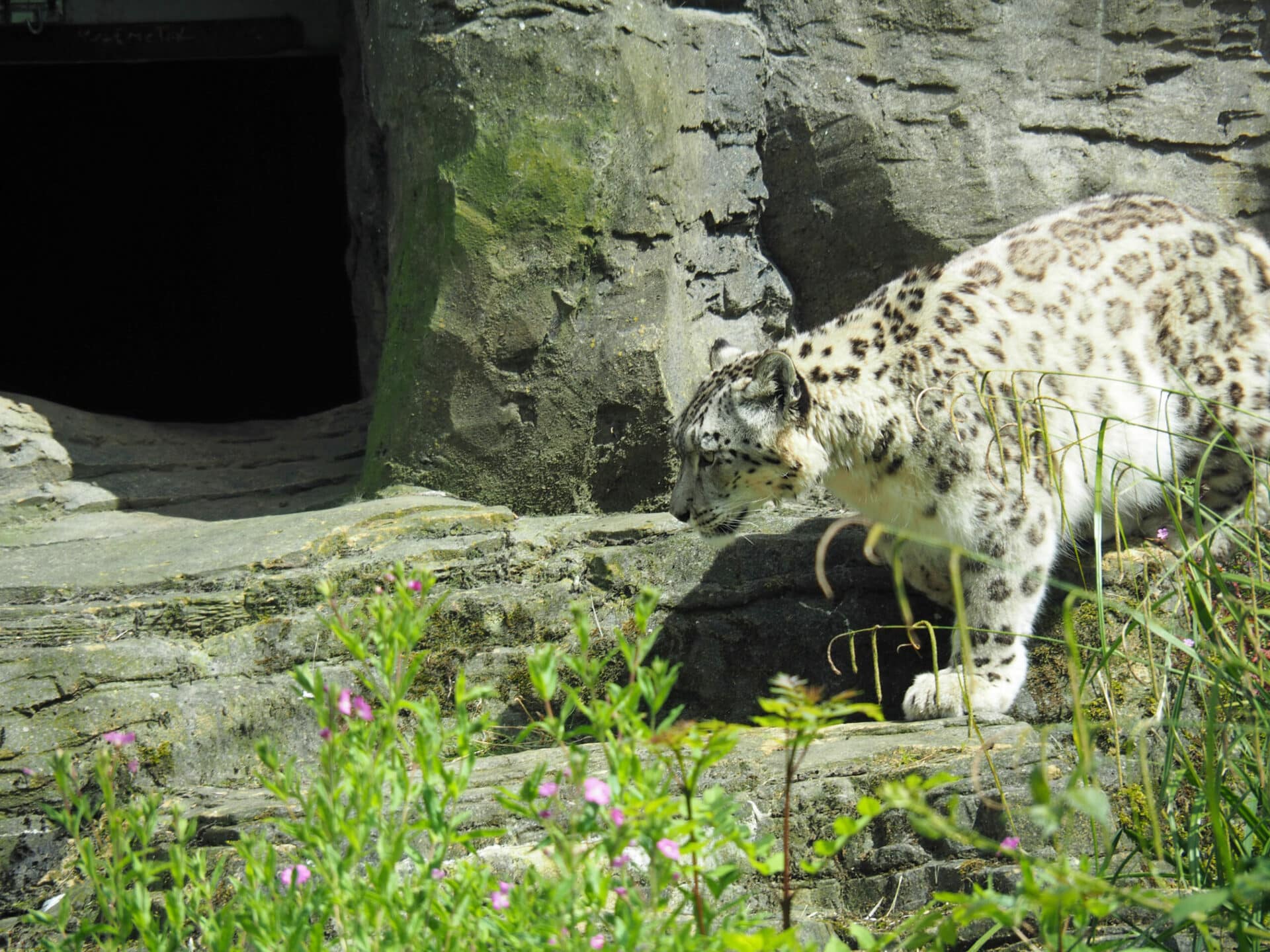 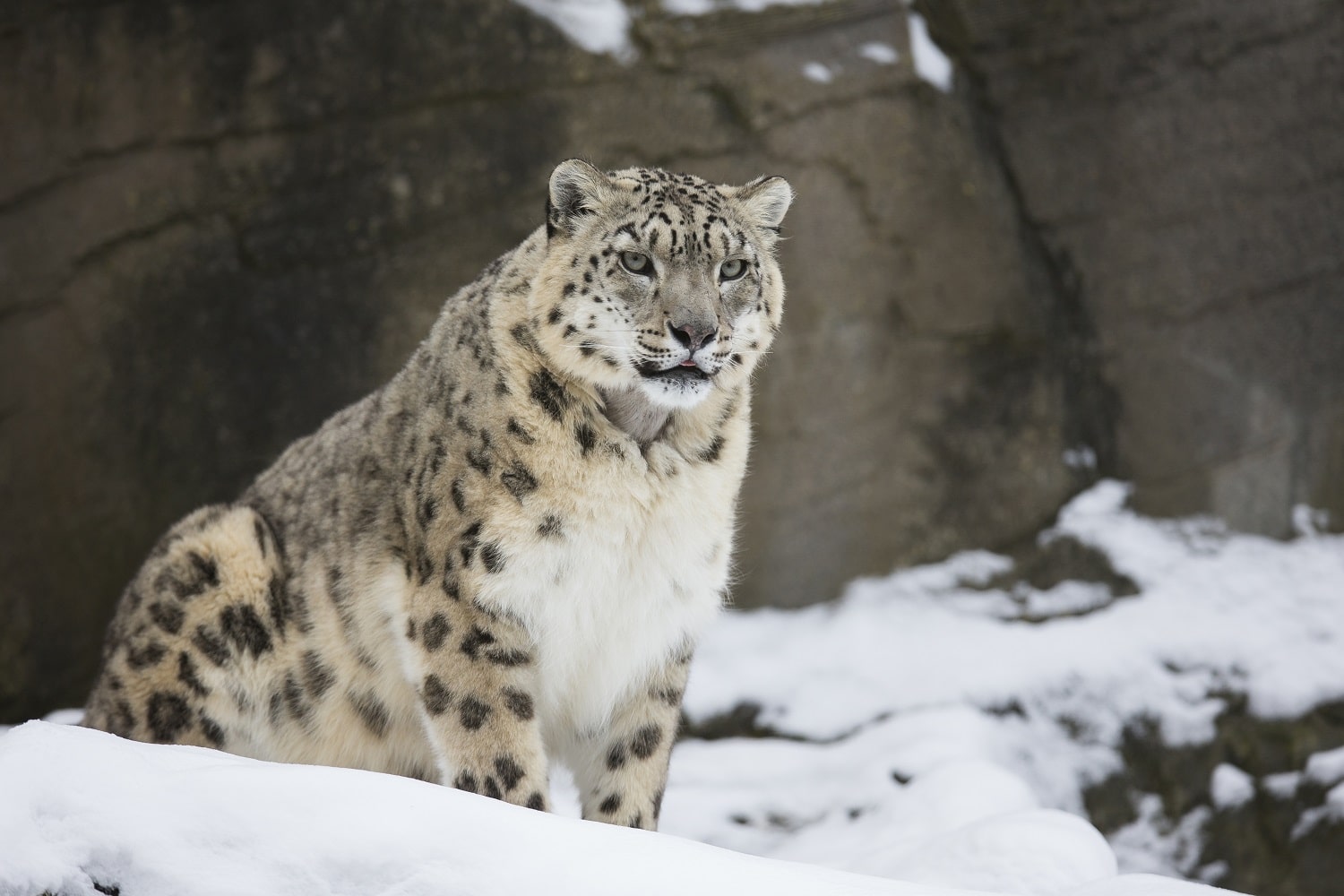 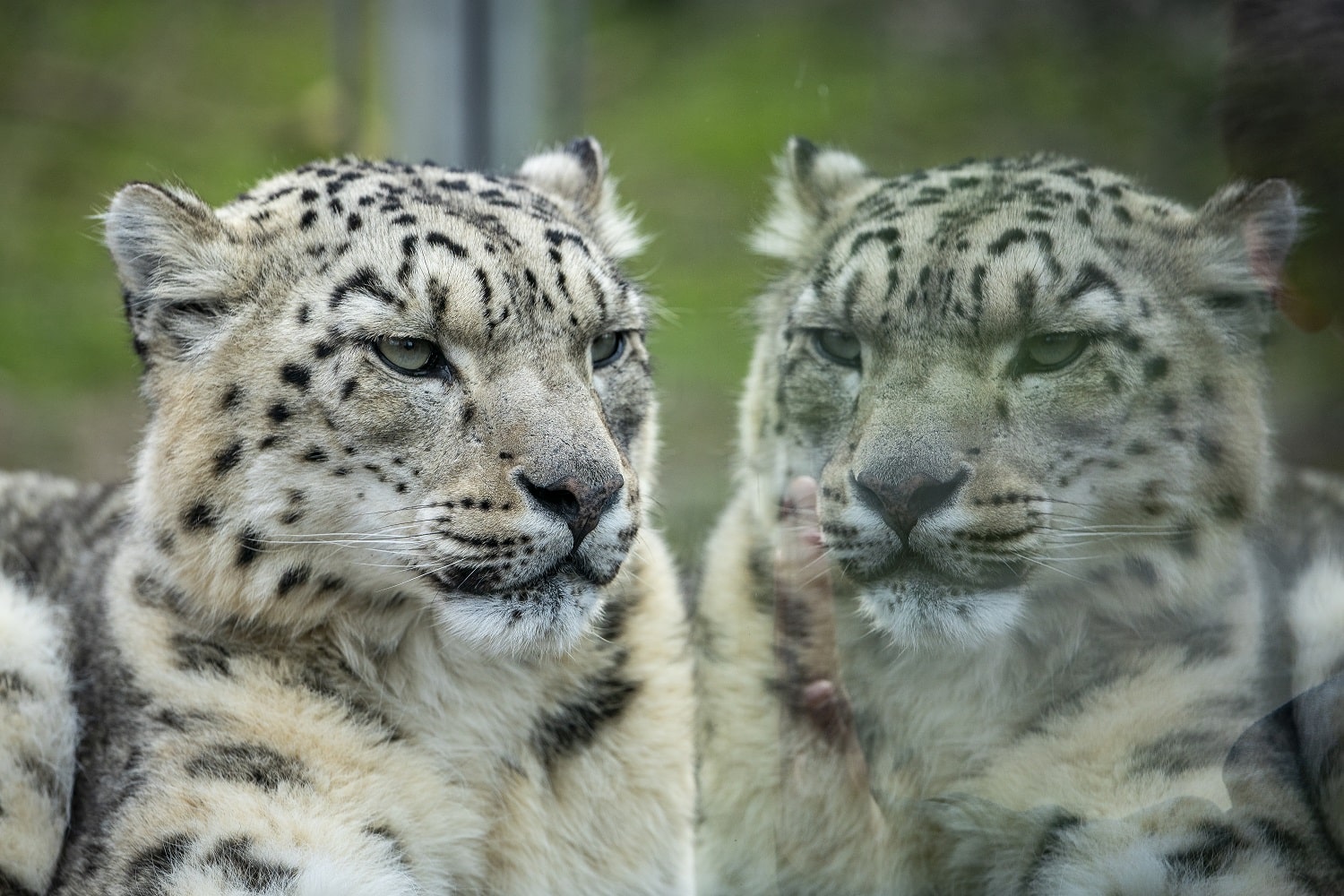 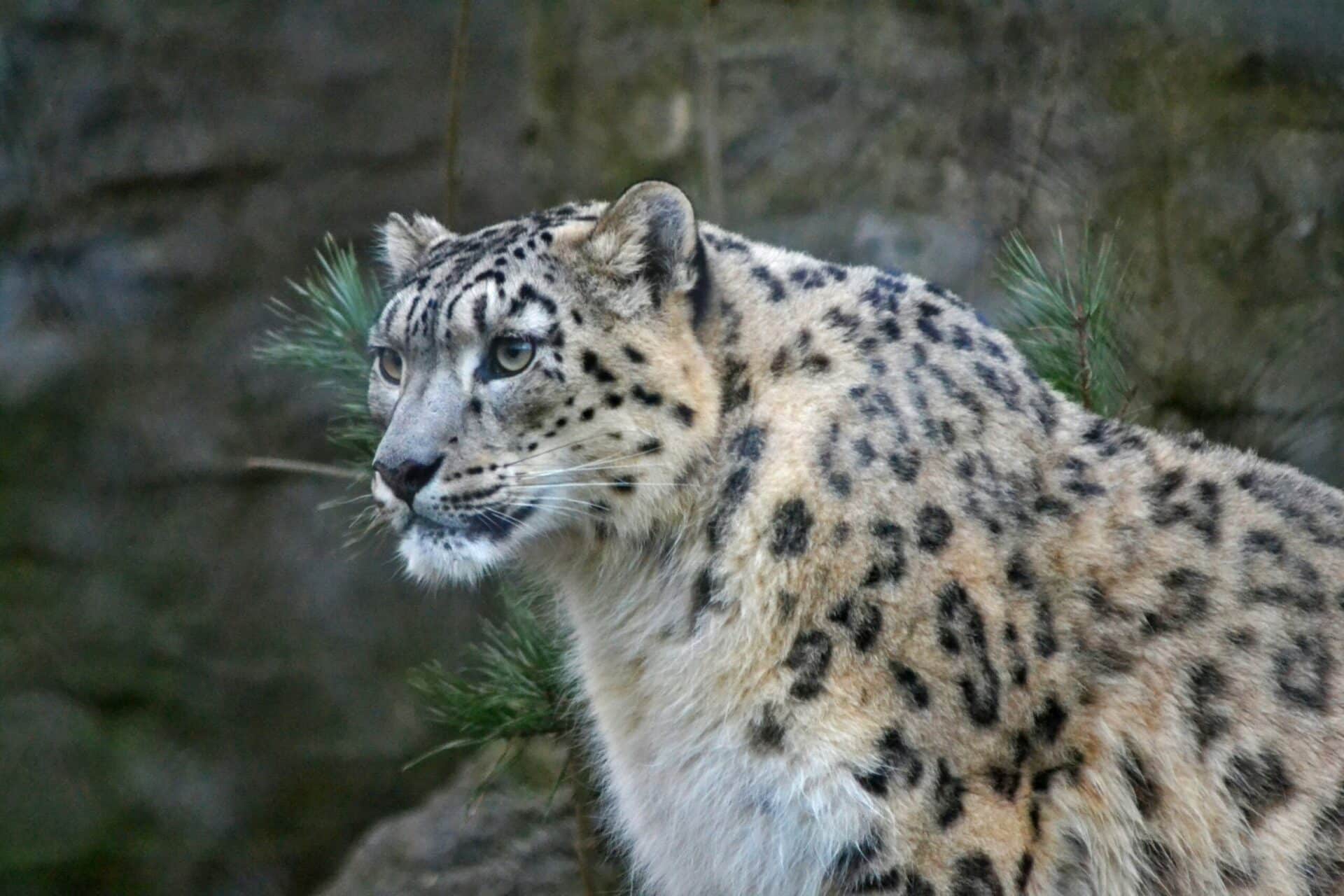 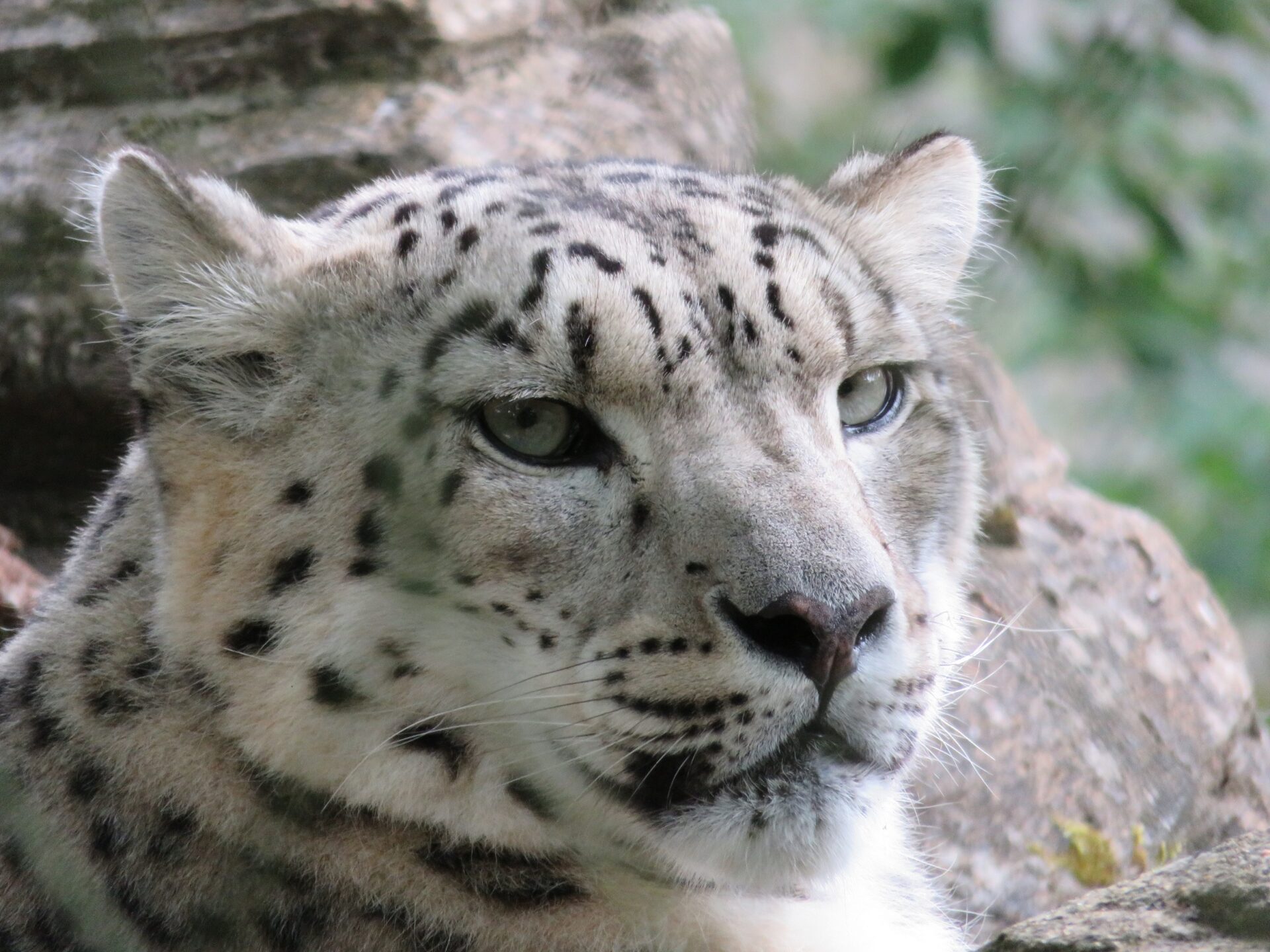 The main prey of snow leopards are mountain-dwelling wild sheep and goats. They will also eat smaller prey, such as marmots, hares, rabbits, pheasants and voles.

Snow leopards stalk their prey from above, chasing it down steep mountainsides. Their shortened front legs but long back legs help them jump an incredible 10-15m in one leap, or 2m straight up. At almost the same length as their bodies, their long bushy tail helps them to balance on the steep slopes, and large hairy feet with claws give them a good grip. This all helps snow leopards take down large prey animals 3 times their own weight.

They mainly hunt at dawn and dusk (crepuscular), with excellent eyesight in this dim light. They have good hearing and they can flatten their small ears back along their head. This means their ears won’t be sticking up, so won’t give their position away whilst they are peeking over rocks, stalking prey.

They successfully make a large kill around once every 8-10 days and will stay with the kill, feeding from it for up to a week.

Snow leopards are found in 12 countries in central Asia, from the Himalayas to the mountains of Siberia.

They usually live in remote mountainous habitats 3,000-5,0000m high, with steep cliffs, ridges and ravines. They also occur in dry open forest and scrubland, especially in the winter when they follow their prey lower down the mountains to where there is less snow so the prey can feed better. They can travel around 12km a day (7km if slowed by more difficult rugged terrain).

Their territory and range closely mirrors that of their large, hoofed prey. In areas where there is little prey their range may be over 1,000 sq. kms. Females usually have a much smaller range than males. They use smell for communication with each other, as they cannot roar like the other members of the big cat family, and scents will last for a long time. They advertise their territory with scrapes, scent marks and scats (poo).

Their pale camouflaged fur grows longer in the winter for warmth, up to 12cm on their stomachs. It is the longest and thickest fur of any of the big cat species. They also use their long bushy tail to wrap themselves up in while they are resting to keep their paws and head warm.

Snow leopards are the top predators in their habitat. They are not hunted by other animals apart from humans.

Snow leopards are solitary apart from during mating times and when mothers are bringing up cubs.

Unusually for larger cats, the snow leopards have a specific time of year for mating. Most births occur in May – June, after a gestation of around 3 months. Mothers give birth in caves or rock crevices, to a litter of between 1-5, but usually 2 cubs. The cubs open their eyes after about a week, their ears after 2 weeks and can walk by about 2-3 weeks.  Their teeth also come through and they are eating some solid food by 8 weeks.  At between 2 and 4 months old the cubs start to follow their mothers when they hunt but won’t be much help at first. Young leave their mothers at about 2 years of age when they become mature.

The main threats to snow leopards are competition with livestock, habitat degradation, prey declines, being killed in retaliation for snow leopards killing livestock (which is more common where their natural prey has declined), and poaching for illegal trade (hides, bones and other body parts). Additionally, snow leopard habitat is subject to extensive agro-pastoral (crops and livestock) land use and is degraded and fragmented in some areas.

Snow leopards are already listed on the international endangered species CITES treaty as Appendix 1, which means they cannot be traded between countries, and are fully protected across all of their range.

Marwell‘s first snow leopards were a pair called Vikku and Pavel from the USA, back in 1977.

Since then many cubs have been born at Marwell, who eventually went on to different zoos all over the world. Many of these cubs left to start families of their own as part of the Snow leopard EAZA Ex-situ Programme (EEP). Through these European breeding programmes the species coordinator uses data from the studbook to manage the non-wild (Ex-situ) populations. They make sure they are stable, self-sustaining, and healthy populations, that can act as a genetic backup to wild (In-situ) populations. This means the Ex-situ population could also be a source of animals for any potential reintroductions back into the wild. With advice from the expert Committee members for that species, the coordinator generates and shares information on husbandry, research, and conservation activities.

The enclosure of current snow leopard’s Irina and Indeever (both born in 2008) was designed to simulate the landscape of the mountains that the snow leopards have evolved for. It has steep areas with rocks, cave shelters, narrow ledges and high vantage points to promote the snow leopard’s natural behaviours of climbing and balancing. As carnivores, they are given meat including horse, rabbit, chicken, and beef, all with the skin still on. They also get a half calf carcass feed each month and days without any food to replicate the days where they would not hunt or eat in the wild.

Sometimes their meat is put into the enclosure in hessian sacks and strung up. The snow leopards need to use their muscles to pull the sack down, just like they would their prey in the wild. They then need to rip the sack open, which is like ripping through the skin of their prey.  New scents are dragged around the enclosure to leave a trail to stimulate the leopard’s olfactory senses (sense of smell). These senses are extremely important to territorial carnivores as they spend a lot of time smelling and marking their territory. Using scent enrichment can encourage general activity and promote natural behaviours like scent marking.

Marwell’s Head of Conservation Biology Dr Philip Riordan is also a member of the IUCN/SSC Cat specialist Group. They contribute to assessments of wild snow leopard populations for the IUCN Red List, and provide information that will help the governments of snow leopard countries in their decision making and policy development. This helps to promote cooperation between neighbouring countries so that conservation efforts work, like the animals themselves, across country borders.