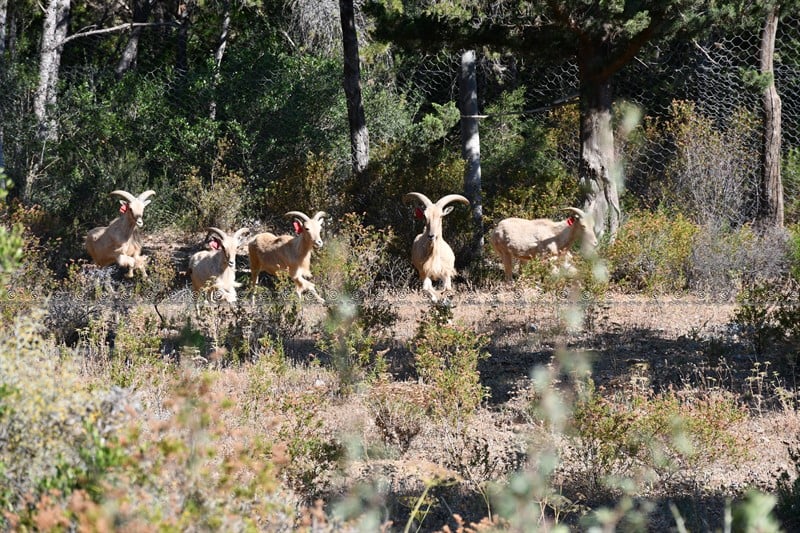 In June 2021, on the Tunisian National Day of Environmental Protection, Marwell Wildlife and our Tunisian partner, the Direction Générale des Forêts (DGF), translocated Barbary sheep from Oued Dekouk National Reserve (NR) to establish a new population in Zaghouan National Park (NP) as part of the 2018-2027 Strategy and Action Plan for the Barbary Sheep (Ammotragus lervia) conservation in Tunisia, which a committee of stakeholders and experts including Marwell helped develop.

Barbary sheep (Ammotragus lervia), locally known as “Aoudads”, are mountain ungulates adapted to arid environments and constitute an important part of Tunisia’s biodiversity. Their population and distribution across North Africa have declined dramatically over the last century, mainly due to the combined effect of poaching and habitat degradation and are listed as Vulnerable to extinction in the IUCN Red List of Threatened Species. In Tunisia, only a few free-ranging populations remain, notably in national parks and reserves and the surrounding areas. For example, Marwell recently confirmed the presence of a breeding population of Barbary sheep in the mountains near Dghoumes NP as part of our continuing monitoring of the wider environment in which scimitar-horned oryx have been reintroduced.

Despite the rarity of the species, population recovery is possible because much of its habitat remains unoccupied, or could be restored by reducing livestock grazing and poaching. Part of the national strategy relies on securing captive and semi-captive source populations to repopulate depleted areas. Since 2003, a captive population has grown in Oued Dekouk NR, near the town of Tataouine, and in 2014 the park managers started reintroducing Barbary sheep to the surrounding area. Today, the captive group numbers over 120 animals. To maintain good population fitness, it is necessary to reduce the density of this captive group and a decision was made to move some animals to Zaghouan NP to establish a new population.

Zaghouan NP is a small mountainous protected area, located in the north-eastern part of the Tunisian Atlas Mountain chain, also known as the “Tunisian dorsal”. This mountain chain crosses the country from the North-East to the south-western direction and separates the areas influenced by the Mediterranean climate from those influenced by the arid climate of the Sahara. Although Barbary sheep may have inhabited this area in the past, there is no extant wild population. However, the existence of a free ranging population (possibly introduced) further North in the same mountain chain, in Boukornine NP, confirms that it can adapt to this habitat.

A preliminary translocation, already performed by Marwell in collaboration with the DGF and the local wildlife authorities, brought a mature captive male from Tataouine to Zaghouan in 2013. This was successful, so, eight years later, three males and seven females have been added to the site with the hope of creating a new population.

The translocated animals were darted with a sedative, ear-tagged and screened for health purposes in Oued Dekouk NR. They embarked on a 10-hour road journey and were welcomed by an experienced team of keepers and veterinarians at Zaghouan NP. They will be kept in an acclimatisation pen for a quarantine period during which they will receive appropriate vaccinations and care. At the end of this period, and following a careful introduction protocol, they will eventually meet the resident male and we hope they will form a stable social herd and start breeding.

The release into the wider Zaghouan NP won’t happen until further ecological research can be carried out to inform the repopulation of the area. In the meantime, this operation is an important step towards population reinforcement and raising public awareness as part of the national strategy and action plan for Barbary sheep.