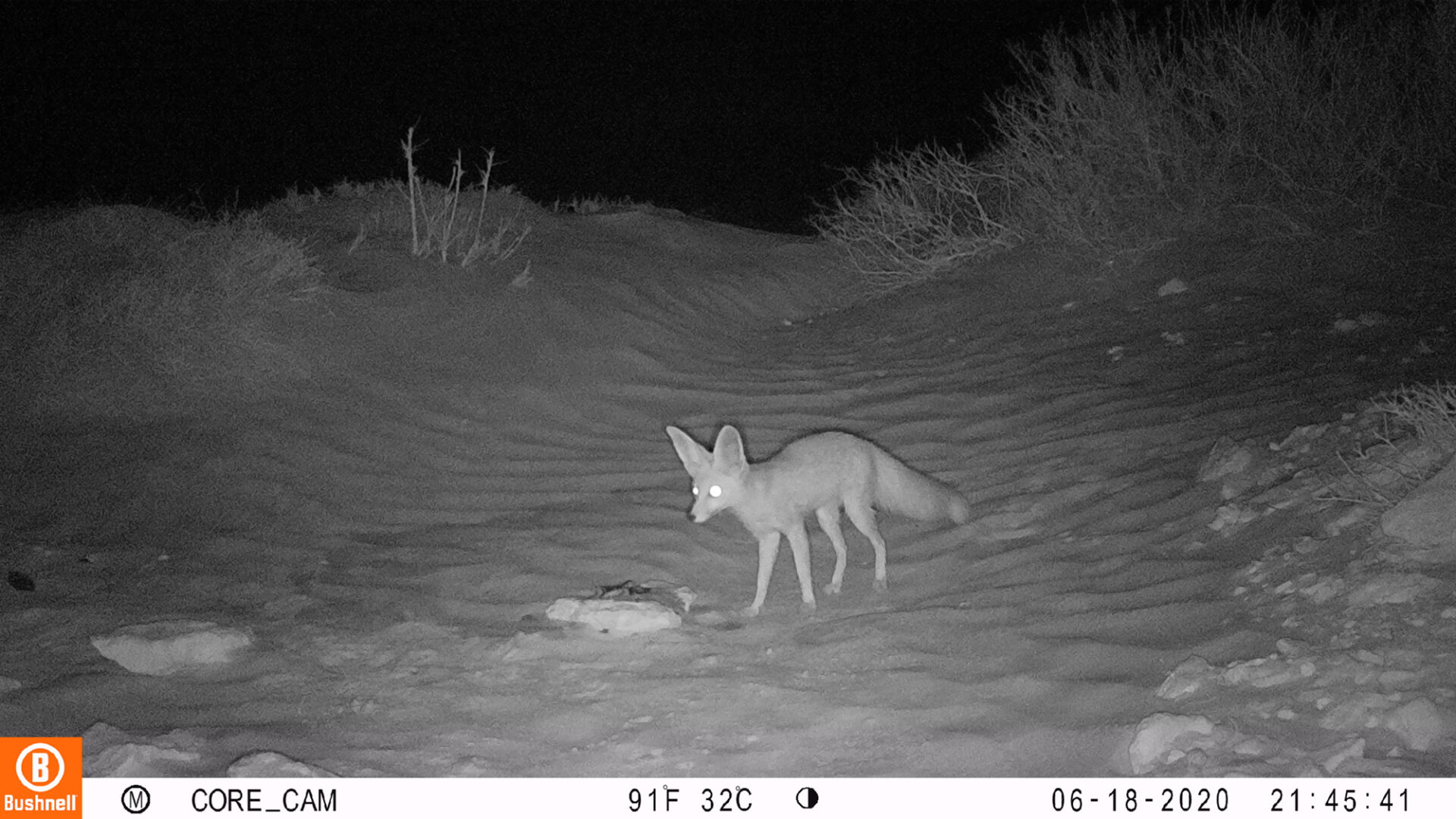 Tunisian canids include the African golden wolf (Canis lupaster), the red fox (Vulpes vulpes), the fennec fox (Vulpes zerda) and Rüppell’s fox (Vulpes rueppellii) with all four species living together in some areas. We know a fair amount about the first three species in Tunisia, but the Rüppell’s fox has been under-studied and poorly described. The species’ presence was only recorded in literature dating back to 1935, and from undated bone remains or very rare direct observations from over 15-years ago.

More recent attempts to investigate their distribution using camera-trapping and faecal DNA samples from six protected areas in Tunisia failed to detect their presence at any site. This was thought to reflect the cryptic nature of the species, low population numbers, or even complete absence of Rüppell’s fox in Tunisia.

Whilst the fennec fox is easily recognizable due to its small body size (comparable to a domestic cat), the red and Rüppell’s fox are larger and of similar size and appearance, with key differences being the colour of the back of the ears and the tail tips.

In 2019, we set up a camera-trap grid to survey Jbil National Park (NP) where addax (desert antelope) have previously been reintroduced, and Marwell Wildlife has been monitoring the re-established population and the wider biodiversity of the park. Jbil NP is located on the edge of The Grand Erg Oriental, the great sand sea, in the Sahara. Although the NP covers a total area of 150,000ha, active conservation management is limited to a 7,700-ha fenced area at its northern edge, and it was in this area that we set up our 18 camera traps in a grid with an additional four camera traps baited with tinned sardines.

The camera traps worked well and we captured over 500 images of wolves and foxes in the park including some clearly identifiable Rüppell’s foxes for the first time in Tunisia. We didn’t obtain any photos of red fox in Jbil, but some images were too indistinct to identify which fox species was captured. Red foxes were previously photographed by the Marwell team close to Jbil NP, suggesting their continuing presence in the area.

Substantial changes in land-use have occurred in Southern Tunisia, including increased oil exploration and extraction, agricultural development, livestock numbers, persecution of predators and tourism. The information we gathered on Rüppell’s fox presence is crucial in this under-studied and changing region. We will continue our biodiversity monitoring in Jbil NP and carry out additional surveys in other protected as well as unprotected areas within the Tunisian desert. This will enhance our understanding of this less explored ecosystem and provide more knowledge to inform conservation efforts around the human-carnivore conflict in North Africa.

Despite the challenges faced by wildlife, the confirmation of Rüppell’s fox presence is encouraging in an increasingly human-dominated landscape.  The persistence of both the Rüppell’s fox and the fennec fox in Jbil NP indicates that, to some degree, ecosystem integrity still remains and gives hope for large-scale conservation efforts to restore these desert ecosystems.