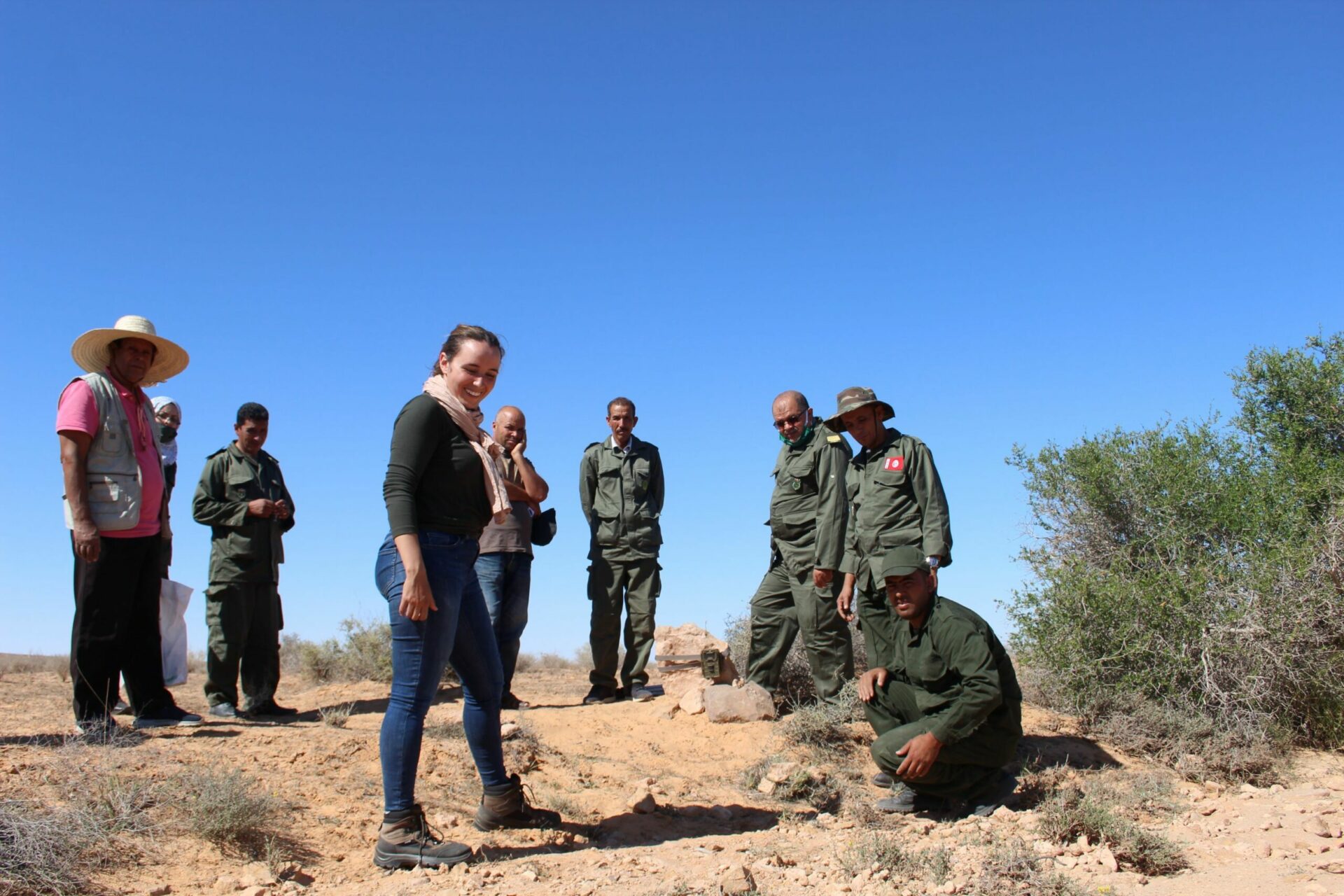 Marie Petretto, Marwell Wildlife Conservation Biologist based in Tunisia, has shared an update from the field:

Marwell’s team in Tunisia have helped to install 26 camera-traps in Sidi Toui National Park to monitor the threatened scimitar-horned oryx and their wider environment. Guards from Dghoumes National Park, who Marwell had previously trained to use and manage the devices, assisted by sharing their expertise with the staff of Sidi Toui.  The rangers in Sidi Toui are now managing the cameras with support from their colleagues or Marwell if needed. The training programme included placement and installation of the cameras, ongoing maintenance, collection and management of large numbers of digital photos, as well as analysis and presentation of data. Though intensive, the participants found the training exercise to be inspiring and demonstrated that good science can also bring people together to meet shared objectives.

The camera surveys in Dghoumes and Sidi Toui  are focused on the threatened scimitar-horned (SH) oryx Oryx dammah, but are also providing valuable information about other important wildlife that is being integrated into comprehensive management plans for protected areas and beyond. For more than 30 years, Marwell Wildlife has been involved in the SH oryx conservation and thanks to the generous contribution of our members and supporters, we are able to assist the species restoration in Southern Tunisia. The SH oryx is a nomadic arid-adapted antelope that was once abundant and widespread, inhabiting the vast aridland steppes that border the Sahara in North Africa. As recently as 80 years ago, over a million SH oryx existed across its historic range between the Atlantic and the Nile, forming aggregations of thousands of animals during their annual migrations. Over-hunting, compounded by drought, desertification, over-grazing and competition with domestic livestock, rapidly drove the SH oryx to extinction in the wild in the late twentieth century, and the IUCN recognised its ‘extinct in the wild’ status in 2000. The species now only exists in captive and semi-wild conditions, and its future is dependent on captive breeding and reintroduction to its former range.

We welcomed our first SH oryx to Marwell in 1971, and since then we have been involved in the management of the captive population by maintaining the international studbook for the species, and coordinating the European population through the European Endangered Species Programme (EEP). We have also donated funds, animals, expertise and equipment to reintroduction projects, in addition to running our own projects, and we have field staff based in Tunisia to manage our conservation projects for the SH oryx and other aridland wildlife and habitats.

Working in close collaboration with the Direction Générale des Forêts (Ministry of Agriculture, Water Resources and Fisheries), our local team works routinely with the staff of the protected areas where the emblematic antelopes have been returned and undertake concrete conservation actions for the species and other aridland wildlife and habitats, using a wide range of methodologies and tools where needed.

As a result of the ‘rewilding’ process that is happening in the Tunisian protected areas, direct observations of animals are becoming increasingly difficult: vegetation is recovering for past over-grazing and the animals that have now all born locally are always more elusive. Additionally, many cryptic species that have key ecological functions are benefitting from the habitat restoration effort and therefore determine the quality of SH oryx habitat. We have now moved into using camera traps to monitor the fauna in the parks. When camera-traps are placed at 1-2 km intervals, they provide detailed information on the presence of different species, their distribution, social structure and health. Long-term monitoring will help us to understand the population dynamics through the different seasons and years.

Since 2018, we have implemented an ongoing largescale camera-trap survey in Dghoumes National Park, which is a key site for SH oryx in Tunisia. This has also proven to be a great way to empower and engage people from local communities as they can directly see the results relatively quickly. This tool meets expectations of both managers and conservationists in providing useable data.  In October 2020, we were eager to start similar work in Sidi Toui National Park, another 6,300ha-protected area located in south-western Tunisia, within the SH oryx range.

Over 70 SH oryx are currently living in Sidi Toui since the founders of this population were introduced in 1999. More recently, the endangered North African ostrich (Struthio camelus camelus) has also been reintroduced to the park. Further preliminary surveys have revealed the presence of resident Dorcas gazelles, Red fox, African golden wolf, African wild cat, porcupine, Cape hare, hedgehog, spur-thighed tortoise, as well as various species of rodents, reptiles and birds. The results from the camera-traps will help assess the status of important wildlife for the park, and to compare broader trends with the results from Dghoumes.

We look forward to presenting further results as the work