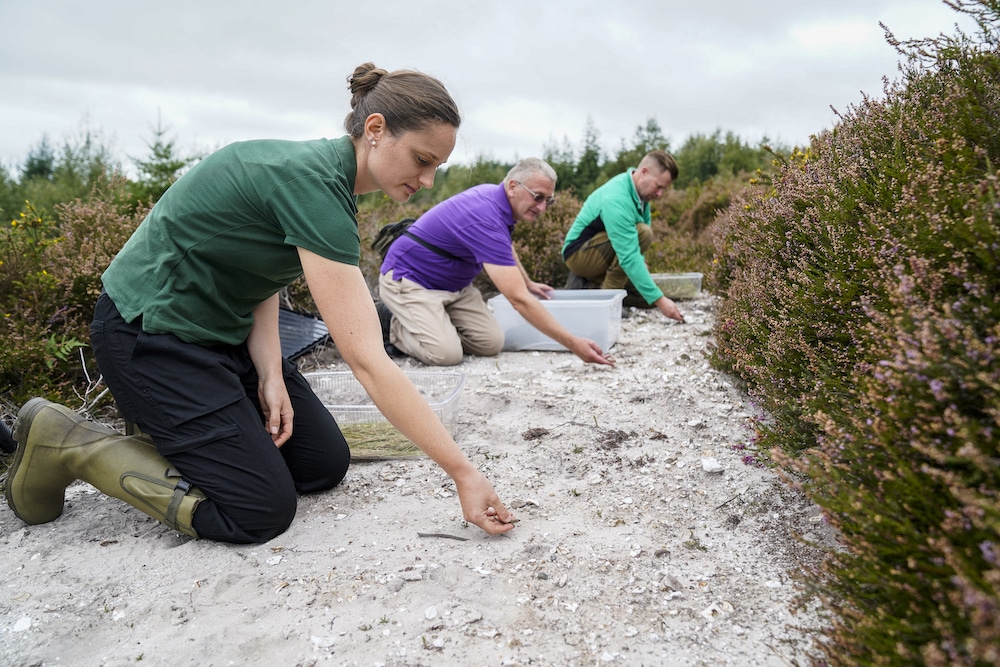 A major effort is underway to boost numbers of the UK’s rarest lizard after a huge forest fire in Dorset this summer devastated one of the country’s remaining sand lizard habitats.

We teamed up with Amphibian and Reptile Conservation (ARC) and Forestry England in Dorset to release more than 200 young sand lizards back into the wild at Puddletown Forest following an exceptional breeding year at the zoo.

Dorset is a stronghold for this protected species but a recent wildfire at Wareham Forest, which burned for more than two weeks, destroyed over 220 hectares of vital wildlife habitat. A team of volunteers were able to rescue and relocate some reptiles in the days after the fire but hundreds of sand lizards were impacted. The fire, which was thought to be caused by a disposable barbecue or camp fire, burned for more than two weeks and took four million litres of water to extinguish.

Sand lizards, once more widespread in England, declined rapidly in the eighteenth and nineteenth centuries owing to large-scale habitat loss and fragmentation. The species was lost from 12 counties in England and Wales and native populations now only remain in Merseyside, Surrey, and Dorset. Even here, losses of 97 per cent, 95 per cent and 90 per cent have occurred respectively. Reintroduction efforts over the last 50 years have worked to return populations to suitable sites and counties from which they had disappeared.

As part of our dedication to conserve species and habitats locally and globally, we’ve been home to a captive breeding population of sand lizards for over thirty years, supporting efforts to reintroduce this species to restored former strongholds.

Working in partnership with the Amphibian and Reptile Conservation and with support from Natural England, Marwell Wildlife has contributed more than 2000 young lizards to 22 release sites across Southern England, continuing this year at Puddletown Forest. Last year we refreshed and increased the size of our captive breeding facility, to increase capacity for young lizards and expand research opportunities in order understand more about this rare reptile and safeguard its fragile populations.

Rachel Gardner, Ecologist at Marwell Wildlife, said: “This summer has seen an exceptional number of sand lizards hatch at Marwell Zoo, enabling a great boost to the numbers being released in Dorset. As well as contributing young lizards to the wider reintroduction program, we have also focused on research into this incredibly cryptic species. It is hoped that improving our understanding of sand lizard ecology and behaviour, as well as movement and survival following release, will help inform reintroduction protocol for this species going forward.”

Sand lizards are dependent on dry, sandy lowland heathland or coastal sand dunes. They are poor dispersers and are unable to traverse unsuitable habitats in order to reach areas which could support them. They are regarded as a flagship rare species, as their existence indicates the health of a specific environment, that will also attract other key flora and fauna, which is why their reintroductions are such a vital part of habitat conservation.

Nick Moulton, Reptile Conservation Officer for ARC, said: “ARC have been working in partnership with Forestry England to monitor reptile populations in Puddletown Forest since 1990. The newly restored heathland allows existing native reptiles to flourish, some of which were rescued during the fire and has also provided the opportunity to reintroduce sand lizards to the area.

“The restoration of heathland has part restored Hardy’s historic landscape of Egdon Heath and also enhanced the over-all conservation status of the area, encouraging the return of rare plants and birds including the Dartford warbler and Nightjar. Keeping the forest sustainable also supports the local timber economy and recreational space to enhance people’s well-being, so the continued management and monitoring of the area has wide reaching benefits.”

Mark Warn, Wildlife Ranger for Forestry England in Dorset, said: “Heathlands across Dorset provide some of the best habitat in the country for sand lizards and it was absolutely heart-breaking to see so much of that destroyed by the recent wildfire. It will take many decades for Wareham Forest to be fully restored but there is still much we can do across the county to help this species.  It’s brilliant to be involved in the release of so many young sand lizards and we will work hard to support their habitat and keenly monitor their progress.”