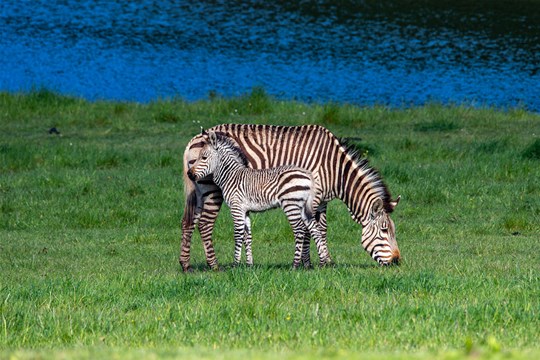 Meet our latest newborns at Marwell – a scimitar-horned oryx declared extinct in the wild, a Hartmann’s mountain zebra foal and some chicks in the Tropical House!

The Hartmann’s mountain zebra are listed as Vulnerable to Extinction as they are at risk of drought wiping out large numbers in the wild. Marwell, which manages the International Studbook for the species, is one of the few UK zoos to successfully breed them. The European zoo population is only small (110 animals) and the aim is to increase it considerably. Therefore every foal counts. In addition, the Hartmann’s zebra at Marwell are also genetically very important to the European Ex situ Programme (EEP) making this foal particularly valuable.

If you are visiting, you can spot the herd in the Valley Field behind Café Graze.

We’re delighted to announce the birth of a second female scimitar-horned oryx calf. The two-week-old newborn is now enjoying exploring the Wild Explorers paddock together with our white rhinos, Grevy’s zebra and ostrich. Born to mother Amy and father Tenzi, keepers say the calf is strong and healthy.

When a female scimitar-horned oryx is close to giving birth, she will separate herself from the herd for up to a week. Once born, the calves are light in colour to help them hide for around two weeks after they are born.

The once abundant scimitar-horned oryx was assessed as ‘extinct in the wild’ by the IUCN in 2000 and the species is reliant on captive breeding and reintroduction efforts for its continued survival. Here at Marwell, we manage the International Studbook for scimitar-horned oryx and we’ve been instrumental in creating international conservation strategies for the species for more than 35 years.

In recent weeks, we have also welcomed two crested wood partridge chicks and a striking turquoise tanager chick in our Tropical House.

Our three adult turquoise tanagers, which arrived from Wuppertal Zoo, Germany in November, are the only examples of their species on display in a UK zoo and this breeding is the first to be achieved in a UK zoo in the last 30 years.