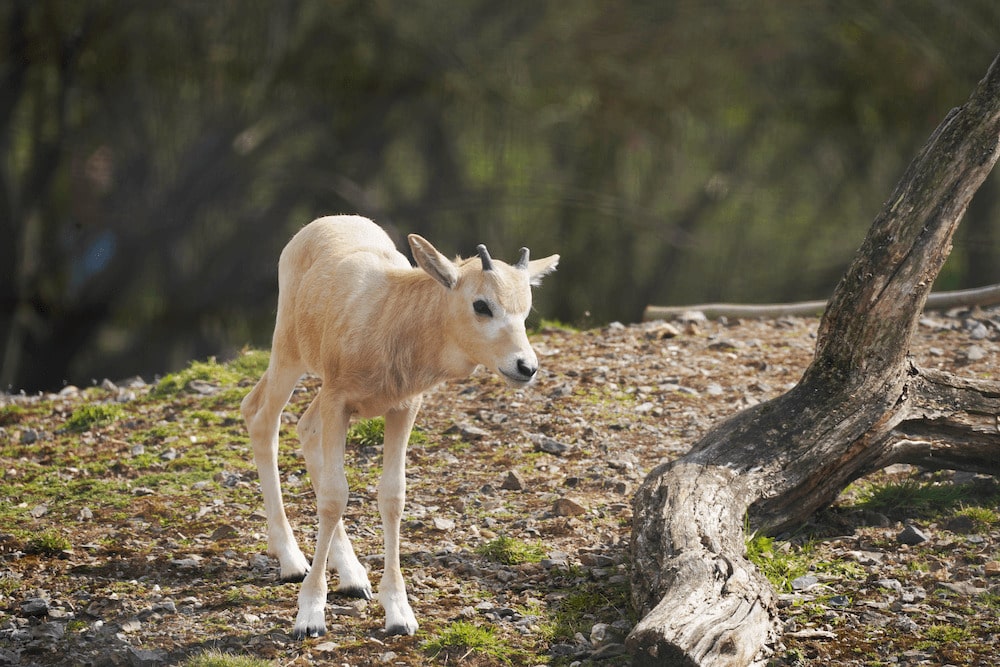 Keepers have spotted our Humboldt penguins incubating eggs. Both parents will take turns incubating the eggs for around 40 days, and care for the young once hatched.

In the wild, the female will lay up to 2 eggs in a crevice amongst boulders or in a burrow that is dug out from deposits of old guano (seabird droppings). The nest may be lined with items such as feathers, driftwood, plants, and pebbles.

Humboldt penguins are typically monogamous, meaning that they mate with the same partner for life. They can recognise their mate within the colony of birds by their loud calls and by looking at the unique spot patterns on their chest. They have a good sense of smell so may also be able to recognise their mate through their scent.

Keep an eye on our social media to see how our penguins are doing and if any of the eggs hatch!

Exciting birth for an endangered species

We’re delighted to have recently welcomed an addax calf! Watch him explore in the video above.

This species is Critically Endangered, and in 2016 there were thought to be less than 100 individuals remaining in the wild. Thanks to conservation efforts, there are now addax present in a large reserve in Niger. In Tunisia and Morocco several hundred addax have been released into large, fenced enclosures.

Born to parents Amelia and Tamerisk, the youngster is male and named Ephedra. Mother, Amelia, is doing well and is very attentive. Keepers report the little one is a “typical, stocky, confident addax boy”. He joins our other male and two female addax and is getting along well with the rest of the herd. He has even been seen spending a lot of time with our Dorcas gazelles and is currently about the same size as them!

You can find our addax herd by Café Graze.

Our lesser kudu herd has gained another member! A female calf, named Akua, was born to parents Kojo and Kanasi in March. Keepers report she is a bold young animal and is confident around her keepers.

She has stayed close to her mother for the last few weeks and is now beginning to venture out into the paddock. The rest of the herd are also reacting well to their new addition.

Lesser kudu are listed as Near Threatened on the IUCN Red List of Threatened Species. About a third of lesser kudu are found in protected areas. However, this species faces threats from livestock farming and ranching because they are vulnerable to the infectious disease rinderpest, which can affect cattle.

Our lesser kudu herd can be found behind our giraffe house!